It seems someone who enjoys jumping from helicopters and kicking down doors as an infantry captain would enjoy whiskey straight after its second distillation—when the alcohol content is 80 percent and strong enough to anesthetize the tongue. 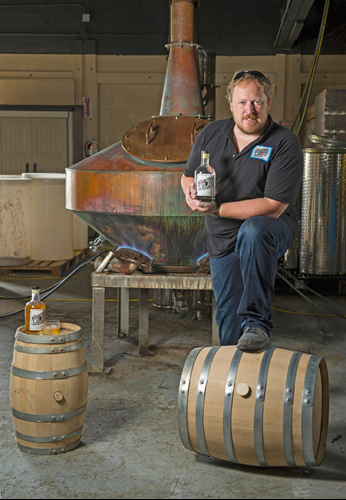 The flavor is as unexpected as Florance’s story.

Yes, he was an infantryman for 12 years and expected a full army career. But in 2009, as he prepared to deploy to Iraq, Florance was diagnosed with Guillain-Barré syndrome, a nervous system disease. After 18 months recovering, he was medically retired. “I retained my strength, but I still experience persistent nerve pain in my legs and feet,” he says.

During recovery, he joined the American Legion. “It was cathartic to share stories,” Florance says. “One night we said, ‘Why doesn’t Indiana have good small-batch whiskey?’”

The MBA pushed his idea forward. “Everyone here was supportive—the librarians, the professors, my classmates, the folks in the Gigot Center, my coaches for the McCloskey Business Plan Competition,” he says. “This company would not have happened without Notre Dame. I can’t emphasize that enough.”

Indiana Whiskey began production in February 2013 in South Bend. Many parts of the process have an Indiana source: the copper still, fermentation tanks, bottle labels and corn, wheat and barley. Barreled whiskey is on track for 2016, and unaged whiskey is distributed to 120 retailers.

It’s a sweet life. “Whiskey builds community,” Florance says. “Sharing drinks with friends means you’ve got friends around. We want to share that with our state.”