“I’VE HAD COACHES AND TEAMMATES WHO HAVE TRUSTED ME. THEY’VE PUSHED ME TO WANT THE BALL IN MY HANDS AT THE END.”

The shot that made Arike Ogunbowale famous hasn't changed her focus.

Even now, it feels like you’re watching a movie.

Arike Ogunbowale is speeding down court with the score tied at 89 in the final seconds of overtime in the 2018 NCAA women’s basketball semifinal game.

She hits the brakes about 18 feet from the basket, creates space with her dribble and launches the shot that knocks the Big Bad Wolf — a heavily favored, undefeated University of Connecticut team — out of the tournament.

As far as anyone knows, no other athlete has been the last-second hero twice in consecutive championship games in any other major sport. Ever. 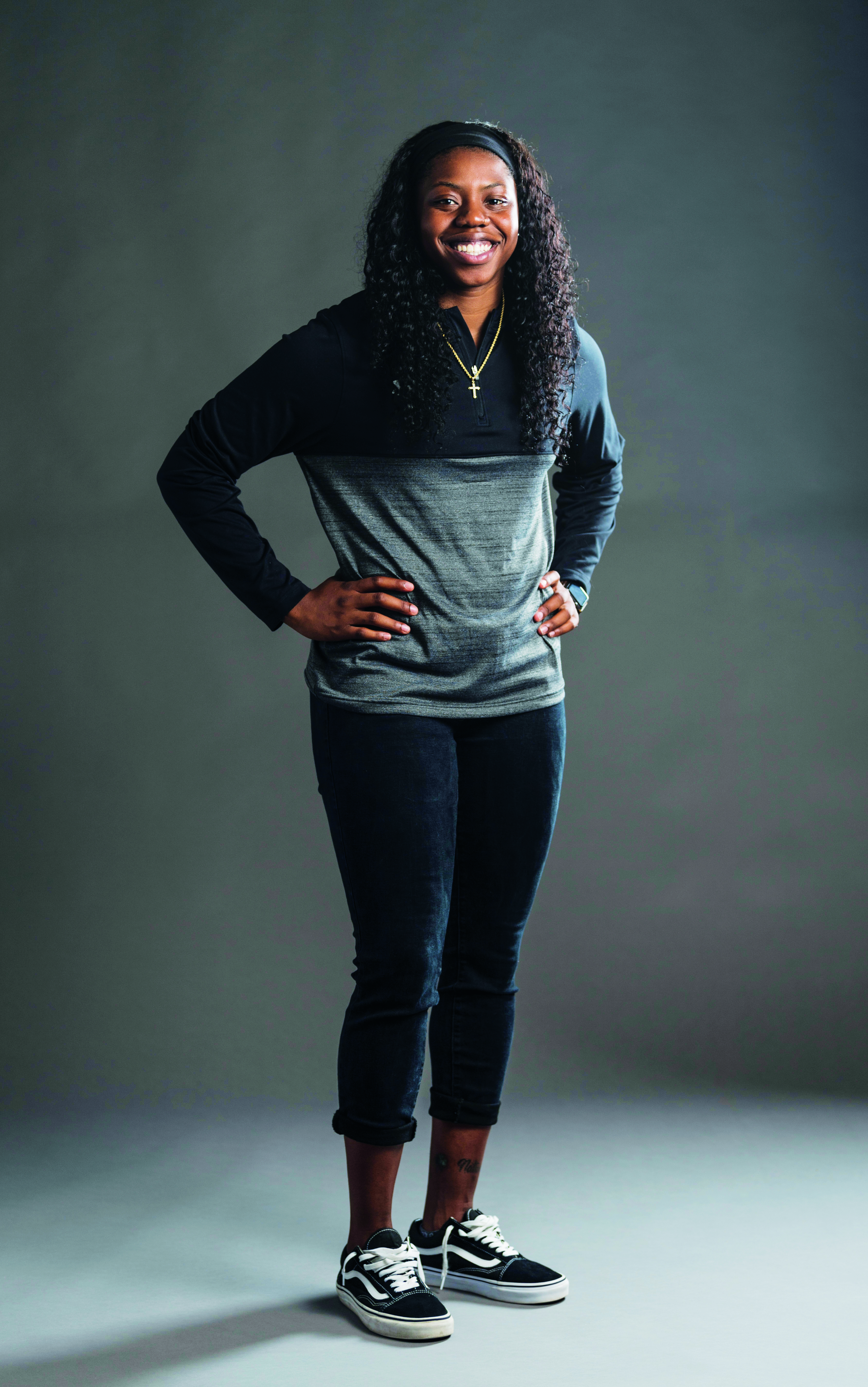 “You just realize that we’re bringing a championship back to Notre Dame for the first time in 17 years,” she says. “It was definitely everyone’s win. The ball just ended up in my hands in the deciding moment. It was all a team effort, the entire season.”

In her view, any of the five Notre Dame players on the court could have made those winning shots. Against Mississippi State, for example, the final play was designed to put the ball in the hands of Jessica Shepard, who had hit eight of her 10 shots that night from close range.

Shepard wasn’t open. Ogunbowale was. She took the pass from Jackie Young, dribbled twice and launched the shot that made her famous.

The following weeks were a whirlwind. You can watch her individual fame unfold on YouTube — with replays of the winning shots, interviews on national television, an appearance with personal idol Kobe Bryant on “The Ellen Show” and her performance as a contestant on “Dancing With the Stars,” where she competed in Converse basketball shoes instead of heels.

“It was definitely an opportunity to represent women’s basketball and my community,” she says. “But when I get asked an individual question, I try to relate it back to the team, because it’s a team sport.

“This is not like golf or tennis where everything is up to you. You’re one of five players on the court, and there are six or seven more off the court who make this happen.”

This focus on Superstar Arike is not something she wanted or expected. She learned basketball on the playgrounds of Milwaukee with two older brothers, and she views herself as someone who still battles for her place. “Everyone just treated me like one of them,” she says. “I had to keep up with the boys.”

It worked for her. In first grade, she played on a fifth-grade team — coached by her mother. “I had to prove myself and play better than my age,” she says.

Out of the thousand or more games she’s played, she’s had a handful where she hit last-second shots. “I’ve had coaches and teammates who have trusted me,” she says. “They’ve pushed me to want the ball in my hands at the end.”

This had made her bold. Three years ago, when asked to christen her high school’s new gym with a ceremonial layup at an all-school assembly, she backed up instead and swished a jump shot from half-court.

She takes her classroom work as seriously as she does her basketball. She was raised that way. Her mother is a teacher and her father is a school administrator. When she was sorting out scholarship offers after high school, Notre Dame had two major non-athletic assets in its favor.

Ogunbowale had a parochial education — a Lutheran grade school and a Catholic high school — and she wanted to keep a focus on her faith. She also planned to major in business, “and Notre Dame has one of the top business schools,” she says. “I knew this was one of the top academic institutions in the country, but I really didn’t know that much about it. I definitely have learned a lot over the years.”

Like a lot of college seniors, she isn’t sure where her Notre Dame degree will take her in the long run. The short term is a bit more certain.

After this final season of college basketball, she plans to become the latest of coach Muffet McGraw’s players to earn money in the Women’s National Basketball Association. Last year’s WNBA rosters included Skylar Diggins (BBA ’13), Natalie Achonwa (BBA ’14), Kayla McBride (BBA ’14) and Jewell Loyd, who left Notre Dame after her junior year to become the league’s No. 1 draft pick in 2015.

Despite the nationwide recognition she earned in the NCAA Finals, Ogunbowale has about 10 players ahead of her in early projections for the WNBA draft. “Hopefully, I’ll go first round,” she says.

She is keenly aware that women’s basketball doesn’t provide the big payday that the elite men receive. For example, Notre Dame grad Diggins has been a three-time all-star in the WNBA and is earning just over $100,000 a year with the Dallas Stars. Meanwhile, across town with the NBA Mavericks, a good but not great male player named Harrison Barnes is paid $24 million a year.

Occasionally, women players have earned $1 million or more from European teams, but there also is a huge lifestyle difference between playing in Istanbul instead of Los Angeles.

Still, Ogunbowale is thinking in terms of a professional basketball career that could last 10 or 15 years. As for what comes later, she’ll start thinking about it when those days get nearer. “I’m the type of person who lives more in the moment,” she says.

Ideally, her road can bring her back toward Notre Dame at some point. “This is like a second home to me,” she says. “It helps that I was on a basketball team. They watch over you and they have a great supporting staff. They’re like your second moms. They give you advice. But I’ve also made a lot of friends here who aren’t athletes.”

Additionally, her goal is to return to her roots in Milwaukee. Her parents still live in the house where she grew up. Her alma mater, Divine Savior Holy Angels High School, held a pep rally for her when she was on “Dancing With the Stars.” It meant a lot to her.

“That is where I was born and raised,” she says. “They all support me.”

She knows that Milwaukee, Notre Dame and basketball will be part of that long-term future, but she isn’t sure how she’ll look at things at age 40. “I think I would be down for owning a team, but I don’t know about coaching,” she says, laughing. “I have zero patience.”

How about a movie?

Simply put, football walk-on Daniel “Rudy” Ruettiger made one tackle in 1975 and turned it into a movie that has grossed $23 million. He’s now an emblem of the Fighting Irish spirit. Fans likely know Rudy better than they know the Four Horsemen or Notre Dame’s seven Heisman Trophy winners.

With real heroics to her credit, could “Arike” be the next “Rudy”?

“Hopefully not,” she says, laughing again. “That’s a lot of pressure, trying to remake a classic.”