There are moments in life that transform everything that matters.

For Erin Barnes (MARK ’10), that moment came during an ordinary Tuesday night milkshake run in May 2010. It was a much-needed, take-it-easy evening with her friends amid the last hurrah of Senior Week. In a few short days, they’d all be Notre Dame graduates, heading in different directions. Barnes had a sales job lined up with Campbell’s Soup, where she would be responsible for a hundred grocery stores from Chicago to Milwaukee.

But on the way to the fast-food drive-thru, Barnes’ cell phone rang. Her mother, Brenda, had been rushed to the hospital after suffering a devastating hemorrhagic stroke.

The story doesn’t begin here, though, as a team prepped Brenda for surgery for the bleeding in her brain. It doesn’t begin as Barnes, in an emotional blur, raced the 120 miles home to a Chicago suburb. Nor does this story commence as Barnes and her two brothers spent long weeks holding vigil in the ICU, waiting for the swelling in Brenda’s brain to subside, waiting to see if she would even awaken from her medically induced coma. 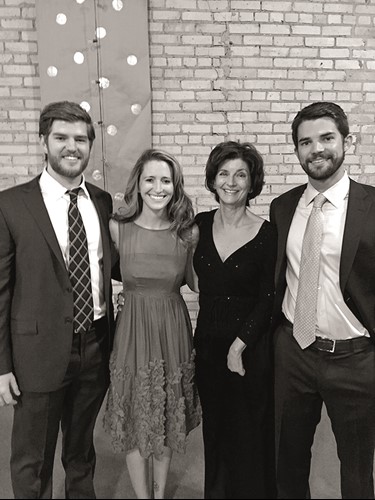 This story actually begins years earlier — 1997, to be exact. Barnes was 9 years old; her brothers, Jeff and Brian were 10 and 7. Brenda, who has invested more than 20 years in her career, was the first female president and CEO of Pepsi-Cola North America. As such, there’s many a woman in a business suit hoping that high-profile successes such as Brenda’s would lead to more corporate leadership opportunities for all women.

Brenda, though, believed she was missing important parts of her children’s lives that she couldn’t get back. In her journal, she wrote that there was no good time to pause her career. The pull of family won out.

To Brenda’s surprise, her resignation from Pepsi made international news headlines and triggered a raging debate about whether women can have both career and family. “My mom would get so bothered by women attacking other women for either working or staying at home,” Barnes says. “She felt like this was a ridiculous debate when women should instead be supporting each other.”

Brenda, though, was at peace with her decision. “She’d say, ‘There are only 24 hours in a day, seven days a week. Make your choices and then be comfortable with them,’” Barnes recalls.

In the wake of Brenda’s stroke, Barnes took this rationale to heart in weighing her own decision about career and family.

Brenda pulled through, although the damage was significant. She had to relearn how to sit up, balance, walk, eat, brush her teeth. While she didn’t lose the ability to speak, she had to work extensively with a speech therapist to pronounce words and sometimes to find the right one.

At the time of her stroke, Brenda was chairman and CEO of Sara Lee, a massive holding company that Brenda restructured to focus on food and beverages. She was known as an involved executive who walked the halls and knew employees’ names. She resigned the post to focus on her recovery.

As Brenda became stable enough to move to a rehab hospital in Chicago, Barnes, who had barely left her side, started her new job with Campbell’s. Unlike the hospital, where the family had been able to stay with Brenda day and night, the rehab facility had specific visiting hours. Barnes, on the road all day visiting the stores in her region, found that often she got back too late to see her mother. At the same time, the family started to realize what the road ahead looks like.

“It was going to be a loooooooong long-term recovery,” Barnes says.

In a decision reminiscent of the one Brenda had made years earlier, Barnes decided to leave her new job to take care of her mother full time. When she told Brenda, her mother broke down in tears.

A few years later, the two participated on a panel for Fortune. “My mom said, ‘You don’t ever want your kids to give up things for you,’” Barnes remembers. “‘But you would hope that if you raised them the right way, that, of course, they would be there for you in your time of need.’”

The family had more than the usual fear that Brenda could have another stroke. Doctors discovered she had a rare condition that made her prone to brain bleeds. When Brenda was finally released to go home, Barnes didn’t leave her side. She even slept with her. “It was like a mother bringing home a new infant, but terrified that the infant was going to die in the middle of the night,” she says. “I would stick my finger under her nose to make sure she was still breathing.”

“I stayed home with her for a year,” Barnes adds. “It was an extremely challenging year, but definitely the best decision I’ve ever made. I helped her get through what was a very, very hard recovery. She could not do anything on her own. Anything. Her life changed with the flip of a switch.”

Brenda had been paralyzed on the left side of her body, which left her with mobility issues and at risk for falling. She had to have someone with her at all times. “My mom would always joke, ‘You know you’re too close with your daughter when ...’ and then she would say any number of the things that you have to do in private that you don’t want people to help you with,” Barnes says. “You lose all modesty. You have to have someone shower you and dress you and do private things for you. It probably brought us closer than people should be with their kids.”

Around the time that a year had gone by, a recruiter reached out to Barnes, inviting her to an interview for a position as an account executive with an advertising agency in Chicago.

“I didn’t feel ready, but my mom said, ‘I’ll be OK. You’ve got to get back to your life,’” says Barnes. When she went to the interview, she brought Brenda with her to sit in the car in the parking garage because she couldn’t leave her by herself.

Later, when Barnes was offered the job, she got off the phone and burst into tears. “I didn’t want to leave her. I didn’t feel ready. It’s probably what every mom feels like going back to work and not wanting to leave her baby. But my baby was very sick, so it was very hard,” she says. “Fortunately, my aunt stepped in and cared for my mom, so that we always had family with her, which was the biggest blessing.”

At that point, Barnes was only 22 years old, but her life was very different, and had very different priorities, from most of her peers — a fact driven home by the expectations of her new job. “There’s pressure when you’re young that you should be the one at the office the longest. You don’t have kids to go home to, so why would you leave early?” she says. “I lived in downtown Chicago during the week, but I would tell my team, ‘Whatever is happening on Friday, I’m leaving at five to drive home to the suburbs to care for my mom. If I need to reconnect when I get there, I’ll do that.’”

Over time, Barnes found herself struggling with other aspects of her professional life. “Folks treated our work like it was life and death, and while I certainly had a good understanding of how important business performance is, and that it ultimately affects people’s jobs, and pay and performance — it’s not life and death,” she says.

It’s not that Barnes didn’t have respect for business; her perspective had changed. “I just didn’t feel as connected to the work because I had something so much more serious going on in my life,” she says. “I’m a very hard worker; I want to make a difference. But I also think, given my experience of seeing what happened to my mom, I have a different set of values and a little bit of a need for a work-life balance. And that lesson happened a lot earlier in life for me than it does for a lot of people.”

Ultimately, Barnes decided to make a radical career change from advertising to nursing. She learned from caring for her mother that she loved taking care of others and that she did very well navigating the medical world. Still, she says, her decision to pursue nursing was a bit of a leap of faith. She enrolled at Seattle Pacific University in Washington state to earn her Bachelor of Science in nursing and specialize in the care of the tiniest, neediest patients. She now works in the Level IV Neonatal Intensive Care Unit (NICU) of Tacoma General Hospital.

“Level IV is the highest-acuity NICU. We take care of kids born as early as 22 weeks gestational age. We care for children with congenital abnormalities, conditions requiring surgeries, full-term kids who have experienced birth injuries, or any newborns requiring additional care,” she points out. “It can be a very challenging and emotional job, but it is also a wonderful opportunity to get to know these patients and families over the weeks to months they spend with us.”

More than a year ago, in the middle of the night, Brenda suffered a cataclysmic brain bleed. She never regained consciousness, dying two days later at the age of 63.

A small comfort to Barnes is that she happened to speak to her mother three times on the day of that last bleed — lighthearted conversations about little things that happened that day.

Looking back to her decision in 2010 to put her career on hold and care for her mother, Barnes has no regrets. “We had a wonderful year together. It changed my life. It was a privilege to be there for that time,” says Barnes. “As hard as it was, that was my favorite time, to spend that much time with her. Looking back on what I did, my feeling is if your heart is in the decision, you’re never going to regret it.”

And then she adds a final, remarkable, thought. “Really,” she says, “my mom was my favorite part of my life.”

Salt & Light is a continuing series featuring faculty, staff, students and alumni who live out Christ’s charge to make a difference in the world.