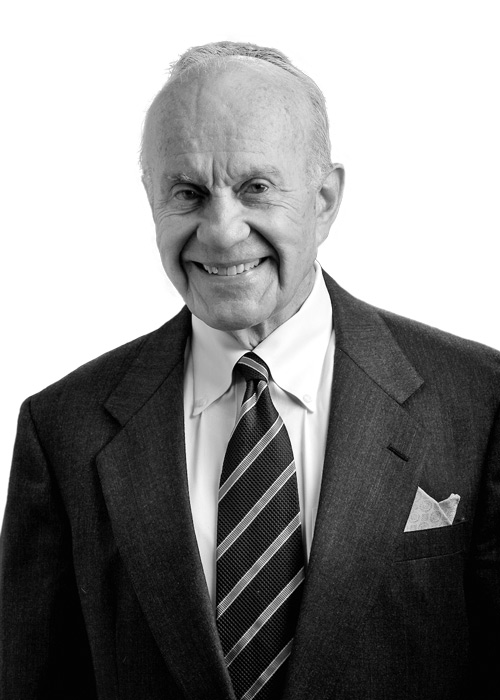 Keane served as the Gillen Dean in the College of Business Administration from 1989 to 1997 and as Korth Professor of Strategic Management from 1989 to 2010. As dean, his vision focused on strengthening the college’s academic reputation, particularly in business ethics and international business, and the need for greater diversity among the faculty and student body. Under Keane’s leadership, the business college moved to the newly constructed Mendoza College of Business in 1995.

He earned undergraduate degrees from Syracuse University and Notre Dame, his MBA from Indiana University and a doctorate from the University of Pittsburgh. Prior to returning to his alma mater, Keane was appointed by President Ronald Reagan to serve as director of the U.S. Census Bureau from 1984 to 1987. He was a veteran of the U.S. Air Force and served in military intelligence during the Korean War.

ROBERT LOWELL MILLER SR. (BS, COMMERCE ’42, JD ’47) passed away on April 27, 2019. Miller, a decorated U.S. Navy veteran and
St. Joseph County, Indiana, judge, was an advocate for homeless veterans in South Bend, founding Miller’s Vets in 2009, which puts men and women back in uniform and provides opportunities to re-learn advanced skills of close order drill participation used in honor and color guard performances in the community. The following year, Miller founded two more programs: The Last Salute, where Miller’s Vets perform a service with full military honors for veterans who have no family, church or veterans organization to assist with funeral plans, and Miller’s Vets Garden of Peace, which provides burial plots for homeless veterans. Miller went on to support the creation of the Veteran’s Center, a division of the South Bend Center for the Homeless, which helps veterans without a home receive treatment and therapy as they transition back into society. In his 90s, Miller developed Rising Improvements, a company that provides mobility aids designed to help the elderly remain independent. Miller is survived by children, grandchildren and great-grandchildren.

RENE J. DOGNAUX JR. (BS, COMMERCE ’48) passed away July 18, 2019, and is survived by his wife, Dorothy J. Opell Dognaux, children,
grandchildren and great-grandchildren. Dognaux retired from Vincennes University as manager of the Old Post Bookstore and previous to that he was President of the Blackford Window Glass Company, personnel manager for Essex Wire Corp. in Vincennes and general manager of the Vincennes Water Utility. A member of the Oaktown & Vincennes Gun Clubs, Dognaux held numerous state titles in Indiana, Illinois and Kentucky and won a national championship in the expert class for rifle shooting in 1952. Dognaux was also a Fourth Degree member of the Knights of Columbus and a member of RSVP.

JERRY HIGGINS (BS, COMMERCE ’56) died July 19, 2019. A U.S. Army veteran, Higgins was the past president of the Notre Dame Club of Peoria and the owner of several businesses over the course of his life, including River Oaks Dodge in Peoria for over 20 years and Dollar Rent a Car franchises in Peoria, Bloomington and Champaign. Higgins was also the past chairman of the board for the Illinois New Car Dealers Association and past president of the Peoria Metro New Car Dealers Association. He was a member of the Peoria North Rotary Club for 24 years and a member of the Galesburg Rotary Club until he retired. Higgins was an active tennis player and was involved in two golf leagues, and he served as a lector for many years in the St. Vincent de Paul Parish. Higgins is survived by his wife, Judith K. Smith, children, grandchildren and great-grandchildren. A Mass was celebrated on the Notre Dame campus for Higgins from his ND56 classmates.

RONALD E. RENNER (BS, COMMERCE ’56) passed away March 22, 2019, and is survived by his wife, Marilyn Renner, children and grandchildren. As president and CEO of Renner’s Express, Renner was a leading executive in the transportation industry for three decades. Renner brought his expertise to the classroom as a guest lecturer at Indiana University and Northwestern University’s traffic management and marketing programs. A devoted alumnus of Notre Dame, Renner was president of the Indianapolis alumni club, a longtime member of the ND Library Advisory Council, and coordinated the Indianapolis metro area “Urban Plunge,” which enables Notre Dame and Saint Mary’s students to experience the challenges of inner-city life firsthand. A long-time lover of nature, Renner served as president of the Crystal Lake Association, leading initiatives to preserve the water quality. A Mass was celebrated on the Notre Dame campus for Renner from his ND56 classmates.

KEITH KITSON LOGUE (MBA ’85) passed away on May 6, 2019, after a long battle against multiple cancers. Logue served in the veterinary community for over 38 years and in 1983 he co-founded the South Bend Animal Emergency Clinic along with fellow local practitioners. Logue and his wife, Julie Logue, founded and managed Stewart Pet Products Ltd., developing the company into the leading dog and cat treat company in the veterinary market. Logue had positions of leadership at Reins of Life Therapeutic Horseback Riding, Edward Lowe Industries, Hill’s Pet Products, Kaytee Products, and the Purdue University Veterinary College Alumni Board, and he served Notre Dame as mentor and inventor. Logue is survived by his wife and two children.

PATRICIA CASSIDY KATER (MBA ’87) passed away June 21, 2019, peacefully at home surrounded by her family after a short battle with cancer. Most recently Kater worked in marketing for Duncan Parnell. Kater is survived by husband David C. Kater (MBA ’87), whom she met in the MBA program, children, and one grandchild. Kater was an accomplished equestrian, competing at the collegiate level at Colby-Sawyer College and Skidmore College. Most of all, Kater loved being with her family and walking on the beach in her beloved hometown of Swampscott, Massachusetts.