Blade point to the other guy’s throat, victory yell like a Viking war cry, standing over the opponent’s prone body. And yes! The victor gets prizes. 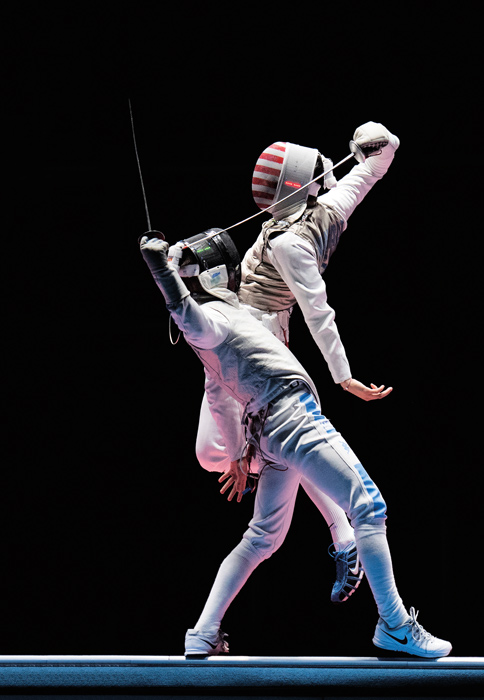 When it comes to sports, fencing has it all — the very definition of cutthroat competition just short of spilling blood. And it serves as a handy metaphor for the type of competitive behavior often ascribed to the business world — particularly Wall Street, where trading is predicated on winners and losers. But is pitting one side against another truly the purpose of competition?
Should it be?

A couple of years ago, I visited the Notre Dame fencing team’s gym during practice. At the time, it was a fairly small tucked away place with about 90% of the floor space painted with lanes and overhung with complicated looking electronic scoring equipment. There was very little room to stand as an observer, which instantly became problematic when practice started.

It was like being dumped onto a crowded dance floor where everyone is armed and going after each other with sharp, pointy blades. Of course, that’s not what was really going on, but to an outsider — and a very unathletic outsider at that — the vortex of sounds and activity was overwhelming. My instincts told me to flee.

The physicality of fencing is easy to get. (I think someone actually bled.) But once you acclimate to the contained melee atmosphere,
it’s the artistry that amazes. The precise strategy that changes on the fly. The lightning reflexes and calculated decisions. Fencing is a masterpiece of strength, skill and coordination combined with the intellectual finesse of Kasparov.

In all the interviews I’ve done with athletes over the years, I can’t recall one who described their sport in terms of beating someone else. When I ask about their reasons for devoting themselves to this activity that claims hours and hours of their lives, usually from a young age, this is usually the part of the interview where words start to fail. Competition at a high level involves something deeply personal, elemental even. And the athlete almost always describes it in terms of achieving their personal best and (almost always with tears welling up) what it means to their families and communities.

Competition is a theme that runs through this magazine in unlikely ways. In our cover story, “Faith, Flourishing and Finance,” Dean Martijn Cremers also talks about competition, but in this case, in the context of the finance industry and how it should contribute to human flourishing. We profile MBA students Phoebe Tzannes and Ben Moore, who each started new ventures to change the game in traditional industries. And then there’s the article about ND Olympic hopefuls — athletes for whom this ultimate challenge represents a life dream.

There are takeaways in all of their stories about how competition can be recast to improve the lot of humanity on a broad scale. Competition by definition will always involve contest. That’s not a bad thing. But at a time when the gap between economic winners and losers dwarfs the Grand Canyon, when contention has become the top note of public discourse, perhaps it’s time to give up the easy definitions. The most formidable opponent is always one’s self. When we strive to perform at an elite level, to develop to the utmost our talents and natural gifts to better contest with the varied and many injustices in the world, humanity wins. Let the true competition begin.