A DREAM FOR AFRICA

Valiwe Ushe keeps a clean house. How clean, you ask?

“My mom would pretty much have spring cleaning almost every weekend. We were turning furniture upsidedown,” recalls her son, who now lives more than 6,000 miles from home.

Growing up, Takunda Ushe learned he could skip the drudgery if he had commitments at church or school. So he played a lot of rugby for Cambridge Academy, his high school in Emalahleni, South Africa. And during his junior year, for reasons even deeper than a teenage boy’s natural revulsion for brooms and dusters, he petitioned the principal to start a club. 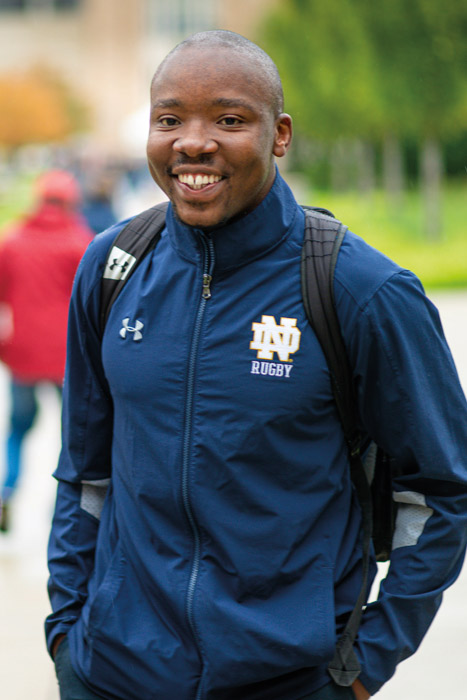 The idea was a simple Christmas charity drive. He and some classmates would collect clothes, unused school supplies, money, anything they could spare, to give to needy children in their hometown. The idea would catch on fast with students. But the principal nixed Ushe’s idea. The school offered enough to do, he said, without adding another extracurricular to the mix.

“So, that was the best thing that ever happened to me,” Ushe says. “Because by him not agreeing for this to be a club, he basically allowed me to go and do it outside of school.”

A lot of students would have taken no for an answer. But even at age 16, Ushe knew his “stubborn” self. “That’s how my mother raised me,” he says, smiling. “Not to ask for permission, but to do something and basically just let people know, like, this is happening.”

Those deeper reasons beneath his determination lay in the ethnic and economic differences Ushe saw dividing him from his peers — and they would lead the future Notre Dame business analytics and political science major to contributions far beyond the collection of T-shirts and pencils.

Ushe’s father, Takesure, left their home in the increasingly troubled African nation of Zimbabwe in 1998, when Takunda was 2, looking in neighboring South Africa for work that could support his family. The boy and his mother followed four years later. They never meant to stay, but Takunda grew up reading the news amidst constant reminders of his outsider status. Even friends would tease him, “Oh, you should go back to Zimbabwe and fix Zimbabwe.”

The immigrant family struggled to secure opportunities for their son. Kids from the Ushes’ neighborhood didn’t go to Cambridge. Ushe recognized he was being given an extraordinary opportunity. “I guess I just felt a sense of responsibility,” he says, “because I knew I was that one kid from my community being pushed forward. I had to consider, what am I giving back?”

His answer to that question was the would-be club that became a nonprofit organization, the Circle of Influence Projects Society (CIPS), which Ushe cofounded with two Cambridge classmates. In short order, CIPS shifted its philanthropic focus to schools and children’s homes in Zimbabwe that had no other support. And Ushe shifted his personal focus to the training of young South Africans who wanted to become agents of change in their own communities.

It wasn’t a straight path, the Hesburgh-Yusko scholar says, and he nearly got lost in the vastness of the needs he aspired to meet. “Looking back now, it wasn’t really about the giving, it was more of just getting myself exposed to some people’s experiences,” he says.

“Some nights I’ll go back home frustrated and like, ‘I’m working so hard, but I’m not achieving anything,’” he adds. “But eventually I think I arrived at where I needed to be, where it was more of saying, ‘I’m not responsible for fixing the problem. . . .My job is to do the best I can, and to be part of trying to find the solution.’”

That consolation coincided with the opening of another door: admission to the African Leadership Academy in suburban Johannesburg, a two-year program with a minuscule acceptance rate. Ushe describes the ALA as “founded on this vision that Africa needs a much more deliberate effort to groom leaders that are going to fix our problems.”

As CIPS grew into organizing camps and workshops that nurtured youth leaders with the training and confidence to become problem solvers, Ushe was forming new friendships with students from all over the continent who had similar dreams and talents. “The hardest thing I’ve done was before I went there,” he says now of the ALA, but his journey was just beginning. “Because then good things just followed.”

One good thing was his first ride on an airplane and a trip to a Model United Nations conference in Qatar, a kind of fact-finding mission through which Ushe and his classmates would learn how to host a Model African Union conference of their own back in Johannesburg. All told, it was a 14-month endeavor that gave him his first project management experience as head of the organizing committee. 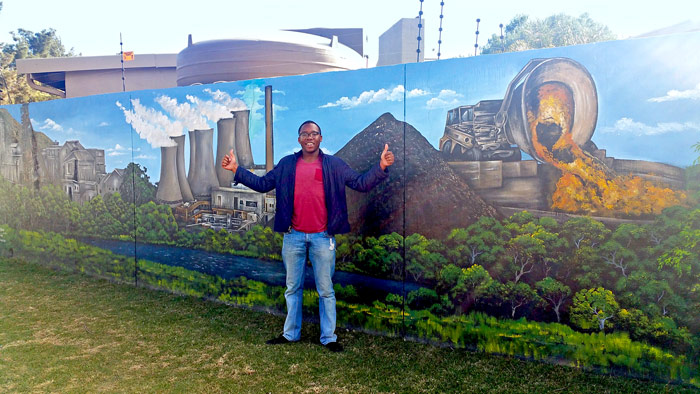 Any sense he needed to be the smartest person in the room evaporated within “a week or so,” he says. Instead, he learned to listen, to draw out others’ strengths and let them own their ideas and results. The reward was friendship, loyalty, a stronger network — and team experience he’s found invaluable at Mendoza.

Until recently, Ushe kept an active hand in leading CIPS. When Liston Cosmas, an ALA classmate from Tanzania, came to him with an idea for building tractors that would run on biomass, the two talked about Cosmas’ bigger-picture interest in innovative technology. Ushe helped him settle on a business idea of designing, building and servicing inexpensive laptops with long-life batteries and preloaded educational materials. “Basically a computer customized to cater to communities that are low-income and don’t have internet access and regular electricity,” Ushe says.

He helped his friend prepare presentations, connect with potential investors and research his market to find partner schools. The business, Cosmic Jaunt, is now trying to scale up across Tanzania and eventually, Ushe says, “across many African countries.”

Adjusting to Notre Dame was tough, he admits, mostly in academics. “Socially, not that much, because I had my ways of getting to know people.” In time, his friends in O’Neill Hall, the men’s rugby club, the Hesburgh-Yusko program and Mendoza helped him settle in.

Then there was his local host family, the Anthonys, who became “a home away from home.” It was all so much more than he’d expected — because he hadn’t really known what to expect. When he arrived on campus in the fall of 2016, he says, “I just wanted to create a better future for my family.”

At first he gravitated toward finance, then decided it wasn’t a fit. But he’d loved statistics. So when Mendoza launched the business analytics major, Ushe joined the second cohort that would graduate in that discipline — eager to become part of a field he’s certain is key to shaping the future of the way business decisions are made. “Right now, I think across the business world, there’s just a lot of emphasis to make data-driven decisions,” he says. “So no one wants to be left behind, and it’s now a game of margins, of very small margins.”

What he sees behind all those numbers is the potential of a better world for human beings. As a freshman, he sought out Georges Enderle, the John
T. “Jack” Ryan professor of international business ethics, to propose what became an independent study of multinational mining companies and the working conditions of their laborers, an important issue in both Zimbabwe and South Africa. Together they undertook an exploration of literature on mining, including a careful reading of a 600-page World Bank document on the subject, which prepared Ushe for a research trip to South Africa’s Rustenburg mines back in January.

Enderle discovered a conscientious student who hasn’t yet formed a clear program for his future as an entrepreneur and leader. “And I think that’s a good thing,” the mentor adds. “He thinks the problems Africa faces need serious analysis. . . .And so these are important tools to address problems he will face in the near future.”

These days, Valiwe Ushe serves as CIPS’ director. The organization supports her preschool, which teaches kids to embrace leadership and basic principles of social change.

“My dream,” her son says, “and it scares me a lot, is one where Africa is a leading continent. Where business in Africa, politics in Africa, is considered the best . . . . So that when I open an economics textbook, or I’m reading an article online, Africa is not lagging behind on GDP, on democracy, on quality of life.

“And some days I really feel very pessimistic about it,” he continues, sounding not unlike that younger self who despaired of solving poverty in the country of his birth. “But I think if we give up that hope that it’s possible, then we’ve lost purpose.”'

He knows he doesn’t have to fix things by himself. If he can’t see the changes he envisions, at least his story might inspire a child the way others inspired him. They need to know, he says, “that an African child can go and chase the best opportunities in the world, compete at that global level and still excel at it.”

Photo by Matt Cashore and provided.

SALT & LIGHT is a continuing series featuring faculty, staff, students and alumni who live out Christ’s charge to make a difference in the world. See bizmagazine.nd.edu for additional profiles. “You are the salt of the earth...You are the light of the world...” 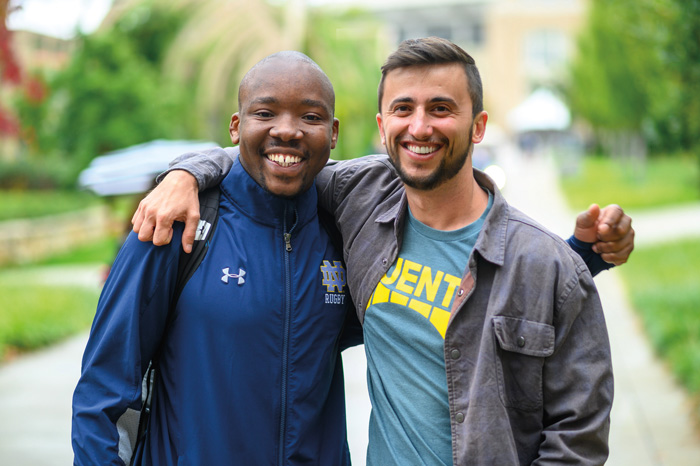