To keep up with career news from the roughly 40,000 undergraduate and graduate Mendoza College of Business alumni around the world, the College launched a new online alumni column called ND Business Briefings.

Each month’s column features a miniprofile about a Mendoza graduate, along with curated updates about alumni who’ve arrived in the C-suite as well as those who recently landed their first jobs; board of directors appointments; professional and personal honors; and startup news.

SEND US YOUR CAREER NEWS

Email your updates about career moves, board appointments, honors received and more to mendozabusiness@nd.edu.

It was fitting, perhaps, that Cory Bailey (MBA ’18) was on the road when the deal closed. SecurSpace, the transportation tech company he founded four years ago during the first semester of his Notre Dame MBA program, was acquired in October 2020 by Envase Technologies, a cloud-based transportation management system.

“Mendoza played such a large role in my involvement in SecurSpace,” said Bailey, who remembers applying what he was learning in his MBA courses in real-time. “The fact that we were able to make a success of it in the end, from my perspective, validates the education as well as the networking.”

SecurSpace is an online marketplace for on-demand, short-term shipping container storage, almost like an Airbnb for intermodal trucking companies and storage yards. It connects those looking for parking and storage options to businesses with excess capacity in their lots.

It was a Notre Dame network connection that accelerated SecurSpace’s growth in 2018, the year Bailey, who serves as the firm’s president, earned his Notre Dame MBA. He reached out to an alumnus, Tom Grojean Sr., who had recently retired from the transportation industry to talk with him about his project. Grojean connected Bailey with his son Tom Grojean Jr. (BBA ’85), who was chairman of Hirschbach Motor Lines. Their conversation eventually led Grojean Jr. to invest half a million dollars in SecurSpace and serve on its board of directors.

“The whole thing sort of hinges on that moment,” Bailey recalled of that investment, which allowed them to expand faster than they originally planned. The startup also received the grand prize at the McCloskey New Venture Competition that spring. Bailey continues to develop the sales and marketing side of things for SecurSpace. He sees the acquisition by Envase as opening up even more opportunities. “There are incredible synergies between what Envase is working on and what we do.”

In October 2020, she joined Aaron Wealth Advisors as an investment advisor and managing director. She previously managed $500 million in client assets at JP Morgan Private Bank. Stasiuk stayed in touch with Aaron Wealth’s founder Gary Hirschberg after first meeting him during her summer MBA internship at Goldman Sachs.

At JP Morgan, a large part of Stasiuk’s focus centered on providing investment guidance to women. “In general, women who have come into wealth either through divorce or through death face really tough situations that require a lot of empathy and compassion, and I felt like I had connected particularly well with clients who were in those situations,” she said.

Stasiuk, an All-American and four-time monogram winner for the Notre Dame volleyball team during her undergraduate days, considers helping clients learn and grow as one of her strengths. “I consider myself almost like a coach for my clients in helping educate them but also making sure they’re well-positioned to achieve their goals,” she said.

“Some of my clients have never even looked at their investment statements,” said Stasiuk, who also serves on the auxiliary board for the Chicago literacy program Reading in Motion and volunteers as a tutor with Chicago Lights. “I think confidence comes with understanding. Probably everybody can think of a time when they didn’t understand something, and so they avoided it. I find it so rewarding and important that women are just as confident as their partners in their financial well-being.”

“I’m extremely excited about the potential of the industry. It’s part of a ‘better-for-you’ trend. Part of living a healthy lifestyle is cutting back on alcohol,” said Woods, who studied management entrepreneurship at Mendoza. The non-alcoholic beer market in North America is predicted to surpass $6.4 billion by 2026. Her startup, Rightside Brewing in Atlanta, currently produces an IPA and a citrus wheat brew and donates 5% of its profits to sobriety-related efforts.

Woods started exploring what it would take to brew and market a premium-tasting beer without the alcohol when she was pregnant in 2018. She drafted a business plan and entered the 2019 McCloskey New Venture Competition.

Through McCloskey, she was assigned a mentor, Ryan Bove (ND ’08), who launched a gluten-free microbrewery in 2012. Two Mendoza students also helped her with market research to validate revenue metrics. “I left with a lot of confidence and steam,” she said. “It was energizing to work through the plan and to have someone validate the plan.”

Woods’ Notre Dame network provided support in other ways, as well. Classmate Molly Iarocci (MBA ’11, BBA ’07), who works as director at DCA Asset Management, served as an adviser through the fundraising process, and Kait Moran (ND ’07) signed on as an investor. 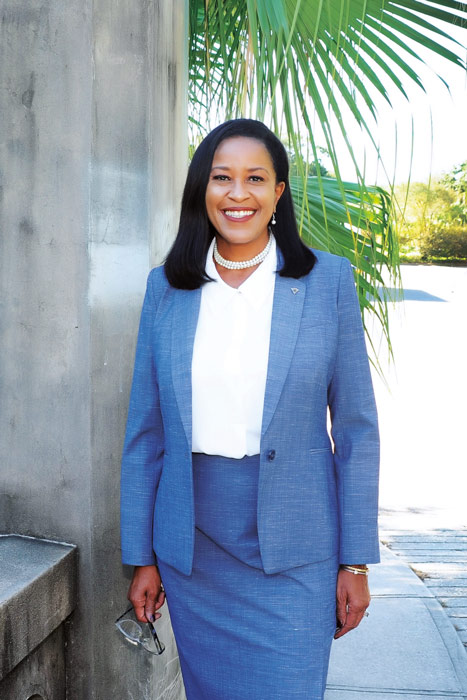 When Voris Roberts Vigee (MNA ’20) stepped into the top leadership role at Volunteers of America’s southeast Louisiana agency, she made history as the 125-year-old organization’s first Black female president and chief executive officer.

Vigee has worked for the nonprofit for more than 25 years, most recently as executive vice president of programs, managing more than 20 diverse programs including intellectual and developmental disability services, veteran services, adoption and maternity services throughout a 16-parish area. Annually, the organization serves more than 50,000 vulnerable people in the region.

One year into the pandemic, her team continues to adapt in the spirit of the organization’s founders to “go wherever we are needed and do whatever comes to hand.” This includes key initiatives related to coordinating COVID-19 resources and assisting people at higher risk of HIV. She is also in the process of rolling out a new strategic plan and a diversity, equity and inclusion plan for the organization.

Since 2000, Vigee has been an international surveyor for the Commission for Accreditation Rehabilitation Facilities, a nonprofit accreditor for health and human services agencies. She has also served as a commissioned minister of Volunteers of America for 21 years and currently sits on the national board of directors for Volunteers of America Inc.

“One day you’re working with the accounting team, the next day you’re doing a finance project, the next you’re running with sales and then you’re going into analytics,” said Durcan, who served four years in the Navy aboard ships stationed in Japan before earning his undergraduate degree in applied mathematics at DePaul University.

After a year in the workforce, he decided to expand his knowledge of analytics. A colleague, Dennis Whitlow (MSF ’16), who had graduated from the M.S. in Finance program at Notre Dame’s downtown Chicago campus, suggested the M.S. in Business Analytics program in Chicago for working professionals.

Durcan quickly found ways his coursework could be applied at his day job. “Whatever I had to figure out for school, I would try to apply it to my job. So I was getting benefits on the professional side because I was adding new things to the company,” he said. Class assignments, for instance, turned into new business processes or algorithms to better analyze sales. “It was almost like studying for exams by just applying it to what I’m doing.”

After earning his MSBA in 2020, Durcan began looking for more professional growth opportunities. Through the Notre Dame network, he eventually landed an interview at EY. “I got someone’s phone number and then someone else’s email, and it snowballed like that over the fall,” he said. In February, Durcan started a job as a senior consultant in Digital, Data & Analytics at EY. “I’m doing exactly what I learned in school — what I’m passionate about — every day,” he said. “It’s been awesome.”