A SCORING DROUGHT COULD HAVE PUT HOCKEY CAPTAIN CAL BURKE OFF HIS GAME. INSTEAD, HE CHOSE TO FOCUS ON WHAT’S WITHIN HIS CONTROL.

Going six games without a win or a goal made Notre Dame hockey captain Cal Burke hungrier than going six hours without a snack — not to mention unhappier.

“The team wasn’t winning, I wasn’t scoring and I thought it was all my fault because I wasn’t playing well enough,’’ says Burke, whose personal goal drought stretched to 20 games. “I felt responsible.’’

For a model student-athlete and finalist for the Hockey Humanitarian Award who’s immersed in improving mental health awareness on campus, this was a chance to lead by example. This was an opportunity — welcome or not — to practice what Burke preached during the student-athlete-led Irish Strong initiative and rely on his attitude to ease anxiety. This was a test of mental strength and a challenge Burke survived because of his character, which hockey people say is even more impressive than his wrist shot.

“That stretch before Christmas, nothing was going right and the No. 1 thing I tried to do was focus on the three controllables I remind myself of every practice: I can skate, I can get to the net and I can be present and focus on being in the moment as opposed to worrying about outside things,’’ says Burke (BBA ’20), who majored in business analytics. “When I look back at that time now, instead of thinking, how am I going to get out of this rut or how am I going to finally score, I asked myself: Did I do those three things today? I knew if I did, eventually I wouldn’t have to worry about the other stuff.’’

That process helped pull Burke out of the emotional hole he had dug for himself. But he realizes that everyone uses different methods and that everyone deals with something every day — one of the big reasons he wanted to spread the word about mental health to change the way we discuss it.

“The biggest thing is it’s such a spectrum from struggling with depression to anxiety to eating disorders or whatever, and, luckily for me, I’ve never had to deal with any of that. But, on the other side, there’s performance anxiety and confidence and I can tell you that wears on you mentally,’’ says Burke, 22. “It’s something that’s not really talked about. It’s just, ‘toughen up.’ So it was important for me to let people know how that stuff can affect your performance and handling it the right way can make you happier in your life and, in my case, make you play better.’’ 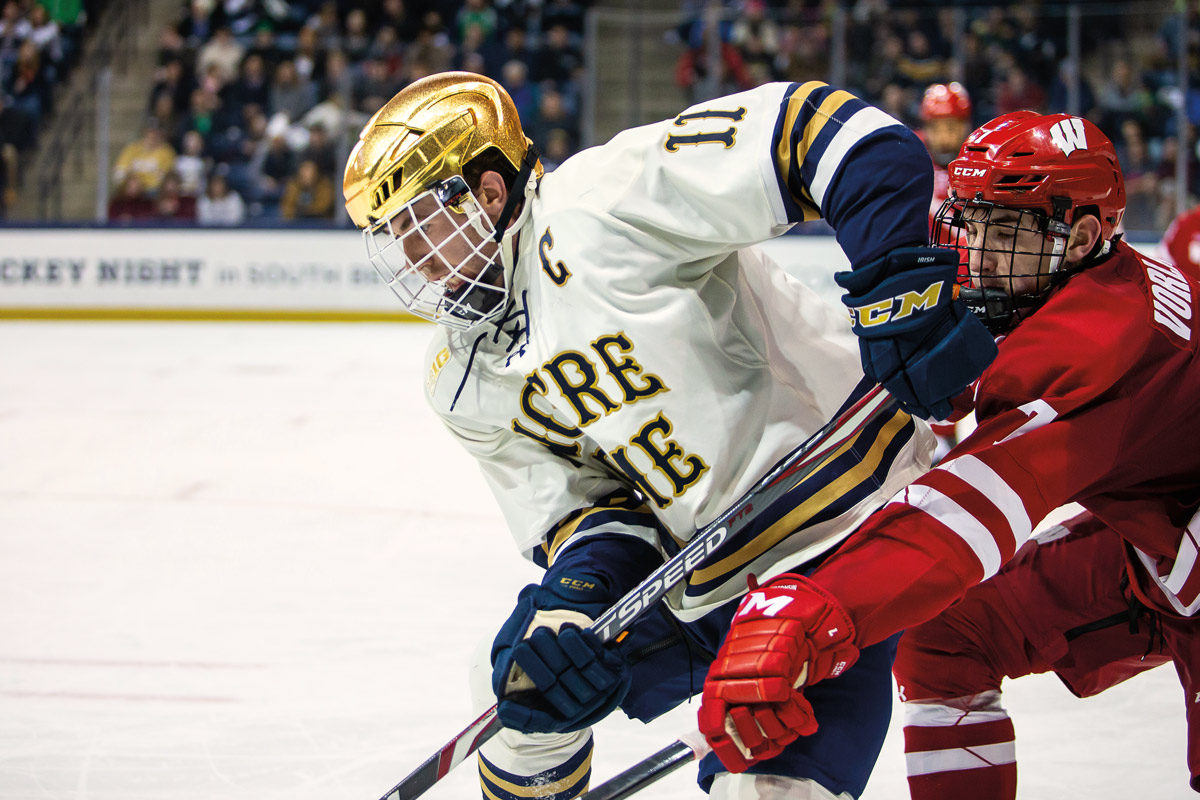 Burke always considered the increased exposure Notre Dame hockey received during his career as a positive except for that brief December stretch when he would have preferred everyone look away so he could hide in the corner. The more Burke tried not to dwell about how long he had gone since scoring or winning, the more frequently people reminded him. No matter how good everyone’s intentions were, Burke occasionally still wound up in a bad place.

“I constantly heard it and was like, ‘Hey, I’m trying not to think about it,’’’ Burke says. “I definitely pressed too much. But in a way, once you let it go, it comes back to you. And it did.’’

The Irish eventually snapped that six-game skid on Dec. 14 in a victory over Penn State. But through the team’s losing streak and his own 20-game drought, Burke never allowed it to affect the other aspects of his game that made the forward so valuable. He never pouted, complained or gave Notre Dame coach Jeff Jackson reason to question why he put the “C” on Burke’s sweater.

“I’ve had captains in the past here like Cal and they’re adults,’’ Jackson says. “When you have conversations with them, they’re not children. Cal’s one of those guys. He’s respected because he works as hard as he does. He has the speed and ability to put the team on his back at times. He’s not a selfish person. He’s not undisciplined. He does everything right. And he played his best hockey since he got that monkey off his back when he got that first goal (Jan. 24 against Wisconsin). Everything started opening up again.’’

Now, Burke’s future looks just as limitless. In March, he signed a contract with the Colorado Eagles, the AHL affiliate of the Colorado Avalanche. His Notre Dame degree will put Burke in position to make a living by blending his two passions: hockey and analytics.

Professors rave about Burke the same way his coaches do, describing a quiet but conscientious student whose drive compelled him to try to get ahead this semester by taking a graduate-level course during the final season of a storied career.

As that career concludes, Burke fondly reminisced about playing the NCAA Frozen Four as a sophomore and representing the Irish as a captain as a senior. He cherished skating alongside his younger brother, Cam, and living with him on campus at Siegfried Hall. He will miss everything about his college experience, from the Saturday football tailgates to the Keenan Revue.

The son of Garrett and Sharon Burke still says things like “wicked fun’’ that remind you of the Boston influence growing up in Boxborough, Massachusetts, rooting for the Bruins. But he leaves a full-fledged Notre Dame man, the destination more rewarding because of his journey.

“One of the pillars we have up there is ‘Excellence,’’’ Burke says, pointing to the wall inside a meeting room at the Compton Family Ice Arena. “I believe in that standard here. And when you see that everyone else has bought in, you’re just expected to give your best effort. To give all you possibly can. I’ve done that.’’

Irish Strong is a student-athlete led movement to redefine how we talk about mental health. Over the past few years, mental health has become one of the biggest threats to student well-being. Yet the way emotional or mental disorders are depicted in popular culture can make it more difficult for individuals — including student-athletes at Notre Dame — to take the steps to find support and help. Irish Strong works to flip this narrative by emphasizing that just like any other element of our game or life, we can all take steps to strengthen our mental well-being.
#IrishStrong