BOB WHALEN’S DECISION TO MAKE EMPLOYEES PART-OWNERS OF HIS BUSINESS HAS PAID OFF IN MORE WAYS THAN ONE.

As employers go, HB McClure checks all the right boxes. The century-old mechanical contractor based out of central Pennsylvania offers health insurance, a 401(k) plan, bonus structure and an in-house training program. Oh, and the employees? Well, they’re all part-owners, thanks, in part, to the 2008 recession and an HR guy named Bob Whalen, a father of four who married his high school sweetheart and always wanted to run his own company.

Just before the economy began to falter, Whalen struck a deal with HB McClure to become the first non-family member to run the HVAC business headquartered in his hometown of Harrisburg, Pennsylvania. The plan was for Whalen to start as a minority owner and eventually buy 100 percent of the company. At the time, the company was in the midst of a record fiscal year, and Whalen intended to use cash flow to finance the purchase. But it wasn’t long before that plan was thrown into jeopardy by the financial crisis that reverberated through the American economy.

Whalen sought a way to save money by making the purchase more tax efficient. That led him to consider an employee stock ownership plan, or ESOP — a defined contribution plan that provides workers with an ownership interest in the company.

The more he researched, the more it made sense — and not just from a fiscal standpoint.

“It perfectly aligns with my thinking from a company culture standpoint,” said Whalen, whose background is in corporate human resources. He earned an executive MBA from Cornell University in 2004 and now hops a plane twice a month to travel to Notre Dame’s Chicago campus where he’s working toward a Master of Science in Finance through Mendoza’s Stayer Center for Executive Education. 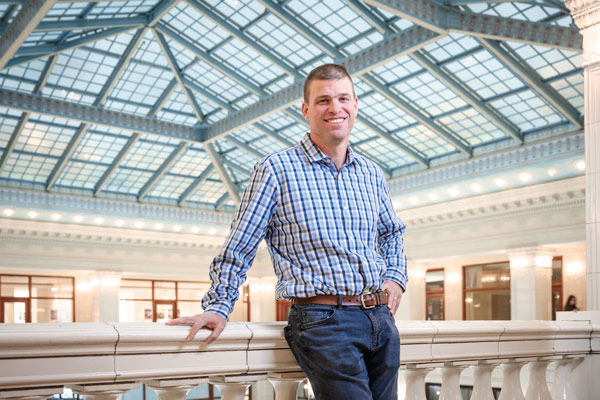 Whalen ascribes to the theory that making employees happy makes customers happy, and he has long believed in cultivating a workplace focused on creating a positive environment for the people who work there. He credits his blue-collar upbringing in Harrisburg and his experience playing youth sports with helping to produce that mindset.

“When I joined HB, knowing almost nothing about construction. My idea was to focus on the culture and on certain business aspects,” he said.

Whalen says the shift to an ESOP helped him salvage the deal, and the sale was finalized in 2010 despite “moderate pushback” from the company’s board. “They just thought I was crazy not to keep the ownership for myself,” he said.

But the numbers don’t lie, and the company has thrived under the new ownership plan — to the benefit of everyone at HB McClure from the bottom up. Since 2010, the ESOP share value has gone from $2.78 to $58.30 and the company has made 17 acquisitions, growing from just under 200 employees to nearly 1,000. A large part of that, Whalen said, is that other business owners looking to divest care about more than just the money.

“It’s a huge advantage to us,” Whalen said. “There are strategies to make a sale more cost-effective to the seller. There are tax options. But the biggest thing I see as an advantage to a family held company selling to an employee-owned business is this allows them to take the financial resources they’ve created with their business and take the money off the table, but at the same time they can feel good about what’s happening with their employees.

“We are not looking to reduce employee count (when we acquire another company). We are not looking for synergies. This is not the private-equity environment,” he said. “We have owners looking to sell to us for less money than to private equity because they believe in us. We have a track record of owners who have sold and who are willing to talk to future owners.”

Whalen says employee ownership has set the tone for a company that makes employee satisfaction a significant component of its identity. And it makes sense, since the employees are the owners.

“Our whole fusion is around trying to have engaged employees,” he said. “That creates raving fans of our customers. That creates superior financial results. That gets reinvested and starts the circle all over again.”

“We spend a ton of time getting this to be a great place to work today,” Whalen said. “That starts with respecting every employee on your team and going from there. We are measuring employee engagement every year, and we know what we are doing works.”

Teamwork is constantly reinforced. “I saw over and over that great teamwork can overcome superior talent,” Whalen said. “Early in my professional career, I also experienced great teams, and mediocre or worse teams. There was no doubt in my mind that a purpose that a team can rally around is key.”

That team mentality has not only made working at HB McClure more enjoyable on a day-to-day basis, Whalen said, it’s made it easier to recruit and retain staff. “We have a lot of potential employees attracted to us because of our employee ownership. They see it right away. The fruits of their labor help them. It doesn’t solve all the ills in the work, but it’s a tool in our toolkit that we use to attract supervisory, management and field-level employees, and over time it becomes a really big retention tool for us.”

HB McClure has made 17 acquisitions since 2010 and expects to do $200 million in revenue this year.