Talking with Genie Deez (BBA ’12) on the phone is like taking a call from the March wind — a bracing gust of sound and energy that covers a lot of ground.

Eugene “Genie Deez” Staples is one of the undergraduate alums featured in “The Jumping Photo” on page 48. At the time we talked, he was in LA in the midst of a commute. In between line drops and the noise of LA traffic, he chatted with enthusiasm about all of the wonderful projects he’s involved in as a film producer and how much he loves Notre Dame and a whole lot of other topics.

Until I asked what he did right after his gr 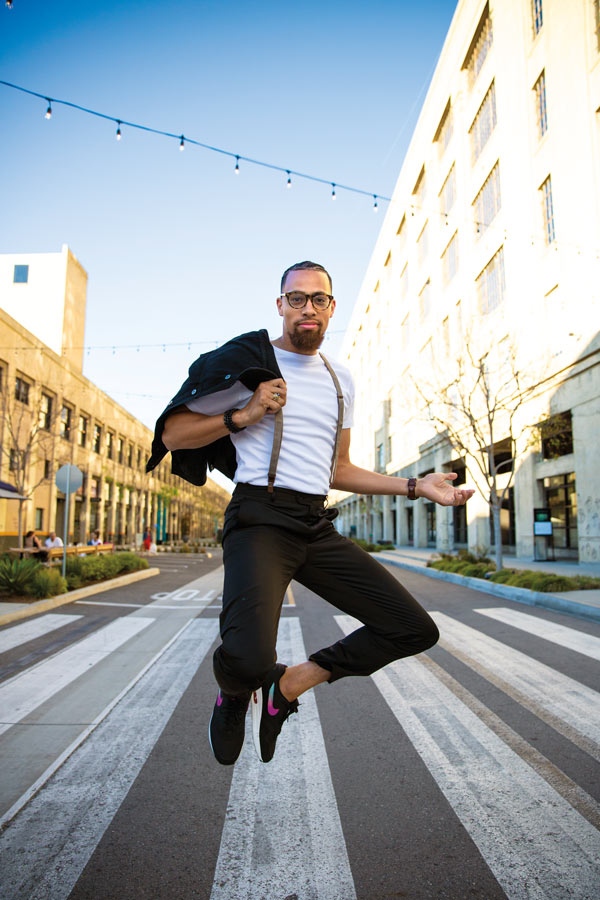 Then a laugh. “I waited tables at Legends.”

Genie has no problem with working at a restaurant, but it wasn’t where he wanted to be. Newly graduated from a school he loved with big dreams that included winning an Emmy, he hadn’t planned for schlepping burgers to be the next step to a successful career as a film director and producer.

After six months of being served up an epic lesson in humility, Genie got his tail in gear and applied to graduate school at USC. His acceptance letter arrived via email during a lunch break.

Most of us have had a “Legends” moment that jolts us into considering the work we do and how much meaning it brings — or doesn’t — to our lives. This is not a new thought by any means, but it has become an increasingly popular topic in public discourse, especially since apparently robots are going to take all of our jobs.

To be sure, artificial intelligence (AI) is causing consequential disruptions in the jobs we do and will (or won’t) do. But there is a deeper discussion to be had at a level that relates to our humanness.

We need to work. Not just to put bacon in the pan, although that’s certainly important. But as humans, we have an existential need to contribute in meaningful ways.

That’s the topic of our cover story, “Automation anxiety and the meaning of work,” which delves into the discussion of AI and automation and the potential impact on us as people. A complementary piece, “Teaching in the age of tech revolutions,” examines what this brave new world means for business schools and how our approach may need to change.

The latter story points out an interesting paradox: The more AI takes over the rote aspects of our jobs — the number crunching, spreadsheet analysis kind of tasks — the more need there is for us to develop our human skills — integrated problem solving, ethical decision making, passion, kindness, collaboration.

Perhaps the rise of automation will offer the chance of a new age — not of the computer as overlord, but one where individuals are better able to serve humanity with all of their divinely endowed talents and resources. Not even IBM’s Watson can top that.