“Everyone comes to it for their own reason,” says volunteer coach Chad Harms of the young men and women drawn to Notre Dame’s boxing clubs. Some do it to build confidence. Some come to be a part of something, to get themselves in shape, or to raise money for the Holy Cross mission through the Bengal and Baraka Bout tournaments.

Harms is an associate teaching professor of management who teaches one of Mendoza’s signature courses, Foresight in Business and Society. In his role as a coach for both the Notre Dame men’s and women’s boxing teams, at any given time, he might be a sparring partner, a referee, a medic and a counselor. Whatever it takes to help these young people develop as athletes and as people through this most elemental and challenging
of sports.

The pathway to boxing for Harms himself was, shall we say, utilitarian. “When I was growing up, I got punched in the face a couple of times, and I didn’t really enjoy that,” he says. “I wanted to learn how to defend myself.”

As a senior in high school bound for Iowa State University, he noticed a headline in the Des Moines Register: “Iowa State Boxers Finish 5th at Regionals.” Then, when he got to school, he met the captain of the team, who happened to be on his floor in the dorm, who introduced him to the team. He spent his first couple years sparring and learning what not to do. But by his junior year, he was pretty accomplished.

That was 1994, when, at 190 pounds, he became the National Collegiate Boxing Champion by knocking out a naval cadet from Annapolis in the second round. “Welcome to the Six-Minute Fraternity,” a coach told him when he stepped out of the ring, where matches typically last for three two-minute rounds.

He returned to Iowa State for his first faculty position after completing his graduate and doctoral work at Michigan State. His former coach, who had suffered a stroke, asked him to help out with the boxing program. Eventually, Harms took over.

In 2012, when he arrived at Notre Dame, he joined the crew of nine or so voluntary assisting coaches, many of them Notre Dame alums. “I grew up in Titonka, Iowa — a small town of 600 people. My parents were on the ambulance crew, my dad was a volunteer fireman, they were on the school board,” Harms says. “When that’s how you see your role models, being a volunteer, being part of things, it just becomes what you do.”

Harms enjoys coaching both the men’s and the women’s teams. “Men tend to see their strength as such a positive part of their arsenal. Some of them start by thinking, ‘I just need to hit somebody a lot harder than they hit me,’” he says. Women tend
to focus in earlier on technical skill, rather than relying simply on their physical prowess. “Ultimately, there are subtle differences,” he says. “But it’s more like 98 percent the same, and two percent different.”

Part of technical skill, Harms says, is outscoring your opponent. “Timing and accuracy of punches becomes a big part of that — being able to defend yourself and counterpunch, putting a skillful attack into action. You’re also needing to think about footwork, positioning, how your opponent’s rhythm matches or disrupts your own rhythm, and looking for opportunities.”

There’s a constant symbiosis of offense and defense in boxing, Harms points out. “Even with the first thing you learn — how to throw a jab — there’s defense and safety that goes along with it,” he says. “If I throw a jab, it’s not me just throwing a punch, it’s me defending myself. I throw it in a particular way with my chin down and tucked in. That way, my left shoulder is actually protecting my head. It’s hard for somebody to hit me when I’m doing that.”

More than anything, he believes boxing gives the students a way to develop confidence. “It’s a frightening thing,” he says, “the anxiety and the buildup of stepping into that ring when you know someone else is there to oppose you.” There’s a Mark Twain quote that he likes: “Twenty years from now, you will be more disappointed by the things that you didn’t do than by the ones you did do. So throw off the bowlines. Sail away from the safe harbor. Catch the trade winds in your sails. Explore. Dream. Discover.”

“I think of Notre Dame as that safe harbor,” Harms says. “It’s the place for our students to try and fail, to go through those experiences so that they can be successful beyond the school. And that’s exactly how boxing is for a lot of these people. They want to face a fear, and by doing that, learn something about themselves. Anything we can do to help these young people be more successful, more confident, will pay out beyond just them. It means that they help others be more confident and successful. That’s the whole nature of Notre Dame.” 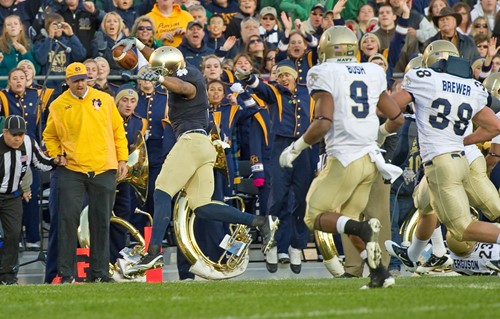 Boxing isn’t Chad Harms’ only extracurricular activity. He also is the first and only faculty member to usher during Notre Dame home football games. Former head usher Cappy Gagnon recruited him because of his size and impressive ability to emit a piercing whistle. “I get to stand down by the band members and the Irish Guard,” said Harms. “That’s just one more way I see my students, and we all react the same. Notre Dame gets a touchdown and it’s high-fives down the tuba line.”