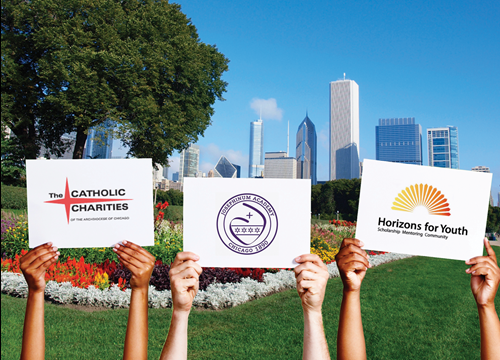 From a Mendoza perspective, it was a trifecta: helping those in need, bonding with fellow Domers and using business expertise to take a bite out of a big challenge. In fact, the inaugural round of the Alumni Impact Partners program that launched in May 2014 was so successful, a second round is underway.

Sponsored by the Graduate Alumni Relations Office, the pro- gram invited Chicago-area Mendoza alums, both graduate and undergraduate, to work in teams on long-term projects for three nonprofits: Catholic Charities of the Archdiocese of Chicago, the Josephinum Academy and Horizons for Youth. Teams were expected to log around 100 hours from May to November.

“The opportunity to bring my skills to bear for an organization that I believe in so strongly, along with other fellow Mendoza alums, was too good to pass up,” said Adam Skibley (BBA ’02), who volunteered to assist Catholic Charities with a strategy to increase corporate engagement and sponsorship.

To accomplish this, Skibley and the other members of the volunteer team had to gain a deep understanding of the organization’s relationships with corporations by crunching data, exhaustively interviewing Catholic Charities board and staff and conducting external competitive benchmarking.

“Our team devoted hundreds of hours,” Skibley said. “But it was inspiring to meet the people from Catholic Charities and learn how they help so many people every day.”

Christina Raddi Vasta, director of donor relations at Catholic Charities, called the alumni team exceptional. “This experience more than met our expectations,” she said. “Like all nonprofit organizations, we are all working so hard just to maintain our programs that it is difficult to get to the next level. This project helped us understand where our priorities should be, what resources we need to focus on.”

Eric Biro (MSA, BBA ACCT 2013) has been recognized as a 2014 Excel Award winner and awarded the silver medal by the Illinois CPA Society for achieving the second-highest score on the Uniform CPA Examination in Illinois. The Excel Award is granted to Illinois candidates who achieve a total average score of 90 or more, complete all four parts of the exam within two consecutive testing windows, and are in the top 5 percent of the scores of those who completed all requirements in 2014 on the state exam.

Christian Estrada (BBA FIN) is a sales representative for Nestlé’s Hispanic division and is responsible for managing 22 stores in the greater Los Angeles area. In addition, he continues to manage Custom Elevation, which sells high-quality handcrafted customized wooden and cotton products made by Nicaraguan artisans. The company recently purchased more efficient machines in order to increase production while lowering costs.

Custom Elevation produces several products that carry the Notre Dame logo. It has also secured a licensing deal with Affinity Consultants and is pursuing a standard collegiate license, which will allow Custom Elevation to expand to other universities and colleges.

Tyler Plantz (BBA FIN), a five-year member of the University of Notre Dame rugby squad and a three-year member of the Irish football team, is at the United States Olympic Training Center, Chula Vista, Calif., for the first National Team Olympic Recruitment Camp for rugby.

Tom Restivo (EMBA) was recently promoted to CEO of Gailey Eye Clinic in Bloomington, Ill. In this role, Restivo is responsible for the growth and stability of the business, as well as development of a thriving company culture.

Kyle Smith (MSB) serves as the director of communications at Frassati Catholic High School in Spring, Texas. Founded in 2013, Frassati Catholic High School serves the families and parishes in the north Houston area of the Archdiocese of Galveston-Houston, preparing students through a robust college-preparatory curriculum rooted in the Catholic faith. (www.frassaticatholic.org). Smith, along with Katharine Kavanagh (FIN ‘12) and Mason Bashaw (MGT ‘12), is part of the eight-person leadership team that guided the launch of the Houston chapter of Young Catholic Professionals (YCP) in January. Nearly 300 young adults gathered on the University of St. Thomas campus for the event. The national movement has chapters in five cities around the country.

Young Catholic Professionals, a 501(c)(3) nonprofit organization, was founded in Dallas in 2010 to help young professionals connect with one another and maintain their Catholic faith while pursuing demanding careers. The group encourages young adults in their 20s and 30s working in various professions to “Work in Witness for Christ” through free speaker events, networking happy hours and retreats.

Konrad Billetz (MBA) has been recognized in Forbes“30 Under 30” in Manufacturing for 2015 for his company, Frameri. http://www.forbes.com/30under30/#/manufacturing-industry

Billetz founded Frameri, which manufactures interchangeable eyeglasses that enable its customers to have one set of lenses that can be used with multiple frames. The system allows them to change frames as they change clothes or shoes.

Billetz and Frameri also have been featured in Mendoza Business magazine, CNBC, InStyle, TechCrunch, Inc., and The South Bend Tribune.

Mike Lenahan (EMBA) recently joined Fairmount Santrol as VP of Industrial and Recreational Products. He is based out of the Benton Harbor, Mich., office.

The founders were inspired by family moonshine stories and recipes shared by friends and fellow Marines that grew up in and around the Appalachian Mountains. While starting Windy Hill Spirits and American Born Moonshine, Dillingham and Koffel traveled the Appalachians and the greater South for a year, spending time with families, hearing first-hand accounts of moonshining and bootlegging legends, tasting a lot of moonshine, and developing an appreciation for the role moonshine has played in American history.

Katie Hench (MNA), and her fellow co-founders of Infiniteach, have recently launched Skill Champ, an educational iPad app for children with autism. Skill Champ is based on best practice autism strategies and teaches 10 foundational level skills, including letter recognition and color matching. Each skill can be easily customized based on the needs and interests of each child.

Michael C. Kane (MBA) is the president and founder of Kane Brewing Company, Ocean, NJ. Following several years on Wall Street as an investment banker, Kane opened the company in August 2011. His goal is to bring his interpretation of American-style and Belgian-influenced craft beers to New Jersey.