“I never wanted to be anything but a priest, which is in itself a great and unearned grace. I hope to live and die a priest, nothing more, but nothing less either.” — Rev. Theodore M. Hesburgh, CSC 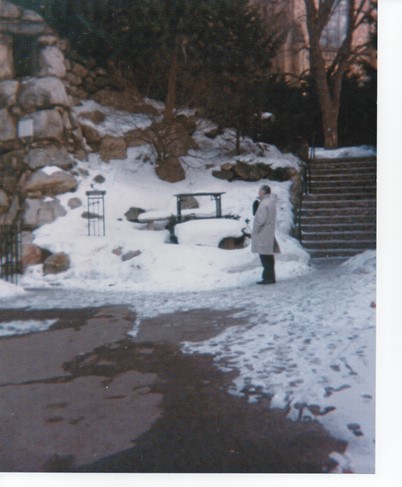 Business students should not only be “highly competent,” but also possess knowledge “matched by integrity of purpose and dedication to a better America,” Father Hesburgh said.Like so many people, causes and organizations around the world, Notre Dame’s business college was shaped by Father Hesburgh’s vision. He wasn’t a natural fan of the business school, which carried the nickname “Yacht Club” when he became University president in 1952. But in 1954, after hearing from a blue-ribbon panel of business educators from across the country, he became convinced that business had an important role at Notre Dame. Instead of discontinuing the school, he became dedicated to strengthening it.

With gratitude and love for his vision and support, the Mendoza College community offers these tributes to Father Ted.

My favorite memory of Father Ted is one that did not include any words exchanged. It occurred on a frigid January day in 2002. The Olympic torch was going to be carried through campus and I decided to brave the cold to try to catch a glimpse. When I arrived at the route, I was surprised that so few people had gathered, which meant that I had a perfect, unobstructed view to watch as the torch made its way past the stadium. Soon, dozens of people from campus started to arrive and shortly afterward, I could see the lights from the police escort coming toward us. And then, the torch, held high by Father Ted, made its way as he jogged past me. Father Ted was 84 years old — and I was in awe.

The world and the Notre Dame community mourns the loss of this incredibly accomplished man, priest and servant heart. He forged the way to help those in need and made an impact that is long-lasting. Thank you, Father Hesburgh, for making Our Lady’s University shine brightly, world class, a force for good, and being the founder of the Master of Nonprofit Administration Program. May you rest in peace.

My uncle, Father Charles Callahan, CSC, was a member of Holy Cross at Notre Dame. For many years, he served as the superior of Fatima Retreat Center, where we used to visit him in the summer. Father Charlie, as he was known, was a decade and a half older than Father Ted, and passed away many years ago. In 2006, when I met Father Ted at an EMBA event, I mentioned my uncle. He responded with great warmth, saying, “Father Charlie was one of the nicest gentlemen I ever knew!” Needless to say,
it was heartwarming to have my favorite uncle remembered that way some 27 years after his passing.

Simply put, he was the greatest man I have ever known. While his list of accomplishments is impressive, the experience of engaging with him was the telling point. To encounter him repeatedly was to repeatedly be inspired and improved.

A warm August evening at 9 p.m. My last week on campus before graduation. The Administration Building was closing for the evening. I was the only one in the halls, and was soon being followed by security. I was determined to make my way to Father Ted’s office to try and meet him. I made it to his office door and started to knock just as security invited me to exit. The large oak door opened, and there stood Father Ted. “It’s OK,” he said to security. “He’s supposed to be here.” Love thee, Notre Dame. We spoke for five minutes, I received a blessing, and was able to meet a man I admired long before that moment. That moment made the admiration very real.

The first time I met Father Hesburgh was both memorable and unorthodox. Father Ted was a guest speaker at the Walter Camp Football Awards at Yale University in New Haven, Connecticut. I approached him after the event as he was congratulating the night’s awardees. He gave me his well-known Father Ted smile while extending his hand, saying, “Hello, I’m Father Ted.” I nervously asked him to sign a Notre Dame football. I remember the quizzical look he gave me saying, “Wouldn’t you rather have the [football] players’ autographs?” As he took the ball from my hands, he followed with, “I’ve been asked to sign many things, but this is the first time I have been asked to sign a football.” Years later, I met Father Ted on campus and reminded him of that night in New Haven. Surprisingly, he remembered every detail. God bless you, Father Ted.

I grew up in a Notre Dame family and revered Father Hesburgh. It was a thrill to see him on campus during one of our annual trips for a football game. Fast-forward 30 years: I’m in the EMBA pro- gram and Father Hesburgh is giving a guest lecture to our class. I desperately wanted to ask a question and even more wanted it to be remotely intelligent. He called on me and I asked him of all the leaders he’d dealt with over his lifetime, which one taught him the most? Without hesitation he mentioned John Hannah, former president of Michigan State University and told a story about the Civil Rights Commission and fishing with him in Michigan. I was pleased to share with Father Hesburgh that I am a proud alumnus of Michigan State and was excited that I’d soon be able say I was a Notre Dame alum as well.