FROM B-SCHOOL TO PRESCHOOL

The village of Bhamdoun, Lebanon, sits 3,300 feet above sea level in the mountains overlooking Beirut. With its close proximity to the capital city and a forecast that calls for more than 300 balmy days of sunshine a year, Bhamdoun was once described as a “glittering gem of Lebanon’s golden age” — an upscale haven for local and Arabian tourists. The village boasted 80 hotels with more than 5,000 rooms. The population swelled from 2,000 people in winter to nearly 10,000 in the summer.

“But now,” said Khalil Matta, “what strikes you most is how empty it is.”

Bhamdoun is Khalil’s hometown. All through his more than 30-year career at Notre Dame, the management professor kept a residence there. After retiring in 2012, he decided to return permanently when his daughter Karen and her husband, Wael, moved to Beirut to open a wine bar.

Khalil returned to his serene, quiet and, yes, empty village, which was much changed from its former prosperity through economic, political and often violent upheaval. Perhaps in some sense, Bhamdoun was awaiting his arrival and that of others like him — individuals with a deep love for their country and a determination to help.

However, even as he entered a new phase of life as a retiree, his village was on the brink of yet another transformation. This time, it was because of the tragedy taking place in neighboring Syria that would send millions fleeing across the borders. These desperate refugees included hundreds of thousands of children who would need to be educated if they were to have a fighting chance for a better life.

Some of these children and refugees would eventually find their way to a small village in the mountains overlooking Beirut, to a retired university professor’s hometown where he had made his Syrian gardener a promise to find a school for his children.

Bhamdoun’s “glittering” fortunes changed in the summer of 1983, when the Lebanese Civil War broke out.

”Bhamdoun was nearly completely eradicated from the map when more than 60 percent of its houses were demolished,” said Khalil. “All the rest of the homes were left as concrete shells with no windows, doors, tiles, bathrooms or kitchens. Everything was stolen, burned or destroyed.”

Much more devastating than the destruction of property was the loss of human life. More than 250 civilians were massacred in their homes. Those who survived were forced to flee. Many established residency elsewhere, in Lebanon or abroad. Most, fearful and apprehensive about new outbreaks of violence, never returned.

In March 2011, Syria erupted into a civil war. Eventually, nearly 500,000 Syrians would be killed in the fighting, more than a million would be injured and 12 million — half the country’s pre-war population — would be displaced.

Two million refugees would flee to Lebanon, causing a 50 percent overnight increase in its population.

“In contrast to other countries, Lebanon did not place the refugees in camps,” said Khalil. “Instead, they were allowed to locate throughout the country and seek shelter among the indigenous population.”

This surge in population put a tremendous stress on the infrastructure across Lebanon. Roads grew congested, hospital occupancy rates soared, sewers overflowed and water and electricity shortages became prevalent. Concerns mounted that terrorists might slip into the country with the refugees.

Bhamdoun’s empty buildings were used for housing, and because many Syrian construction workers were already in the village, it received more than its share of refugees.

For Khalil, the plight of his Syrian employee brought the situation into focus.

Asim first came to Lebanon seeking work in the construction industry several years before the start of the Syrian conflict. Introduced to Khalil through a relative, he agreed to serve as his handyman and gardener. His wife Baydaa was still living in their hometown of Daraa, which would become the horrific scene of violence as demonstrators first clashed with government troops.

As fighting intensified, many from Daraa fled to Bhamdoun, where they had family and friends already working. Asim went from living alone to sharing his small apartment with 11 relatives, as his wife, son, father, mother and all his in-laws moved in with him. 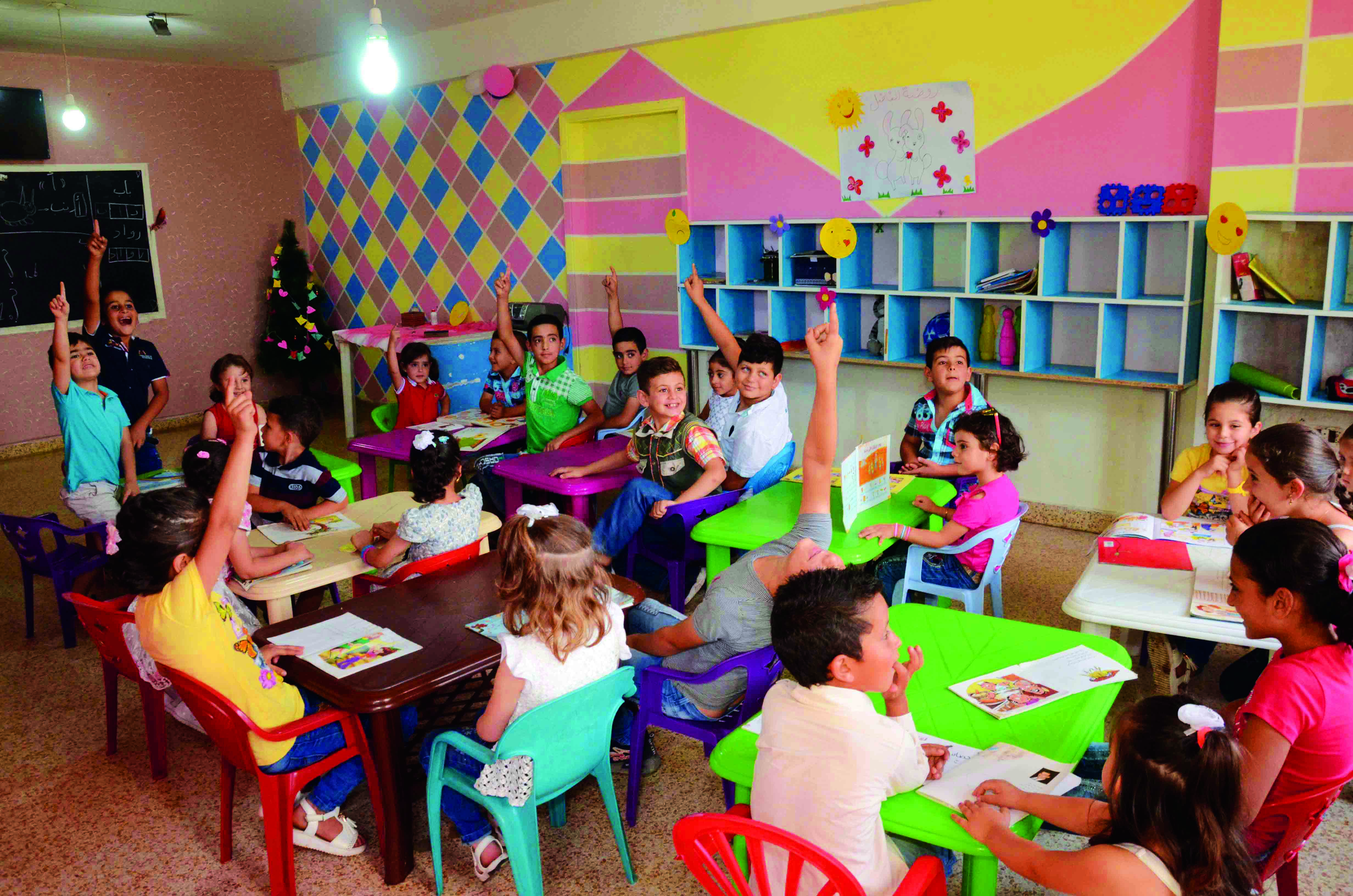 Schools struggled to accommodate the massive influx of students as the refugee families fled to Lebanon. “It was not only the lack of facilities and the shortage of qualified teachers that was causing problems, but also the difference in the curriculum between the two countries,” explained Khalil. “The Lebanese curriculum was much more rigorous with two foreign language requirements and almost all science subject matters being taught in English or French. Syrian kids were only proficient in Arabic.”

Syrian children also were not offered the opportunity to enroll in kindergarten classes, while the Lebanese typically attend two to three years of preschool. Being denied this early start essentially meant that the Syrian students entered school with a significant knowledge deficit — one that would be difficult if not impossible to make up.

Khalil thought about his promise to his gardener to give his kids a Lebanese education. “After going to four different places, including one UN school that was basically bursting at the seams, I was feeling very frustrated and blowing off steam to one of my friends. He said, ‘Why don’t you stop wasting your time running around and just start a school?’ And I said, ‘Why not?’”

And so the retired professor who once taught future CEOs at one of the top-ranked Catholic business schools in the U.S. found himself starting a preschool for Syrian children.

Khalil’s brother owned a small place that was essentially a big room with a bathroom next to it. Parents painted it and put up a blackboard. One built bookshelves, while another donated a wood stove. Matta visited the public school and borrowed its curriculum, then bought books, notebooks, pens, crayons and other school supplies. He bought plastic tables and chairs and donated his laptop and a music player. Asim did all of the construction work to get the school up and running.

“All that was left was someone qualified to run the school and teach the kids,” said Khalil. Asim’s wife, Baydaa, volunteered. It turned out that she had earned a master’s degree in theology and was quite a proficient teacher.

In the four years since the school opened, more than 100 children have sat in those plastic chairs, learning the alphabet and how to count in Arabic and English, some math, a little history and geography to give them a sense of place. This year, due to student demand, they divided the classroom into two sections and added another instructor.

Ann Tenbrunsel, Khalil’s Mendoza colleague, created a GoFundMe campaign to raise $1,500 for playground equipment after visiting the school in summer 2018. The equipment was scheduled to be installed by the time school started in October.

“The students are thriving at the school,” said Khalil. “They can’t wait for me to visit the school so that they can show off what they have learned. Most rewarding, though, has been their ability to enroll in first grade and follow the Lebanese curriculum. Where once they had a reputation for being underperformers, our graduates can now compete head on with the best Lebanese students.” 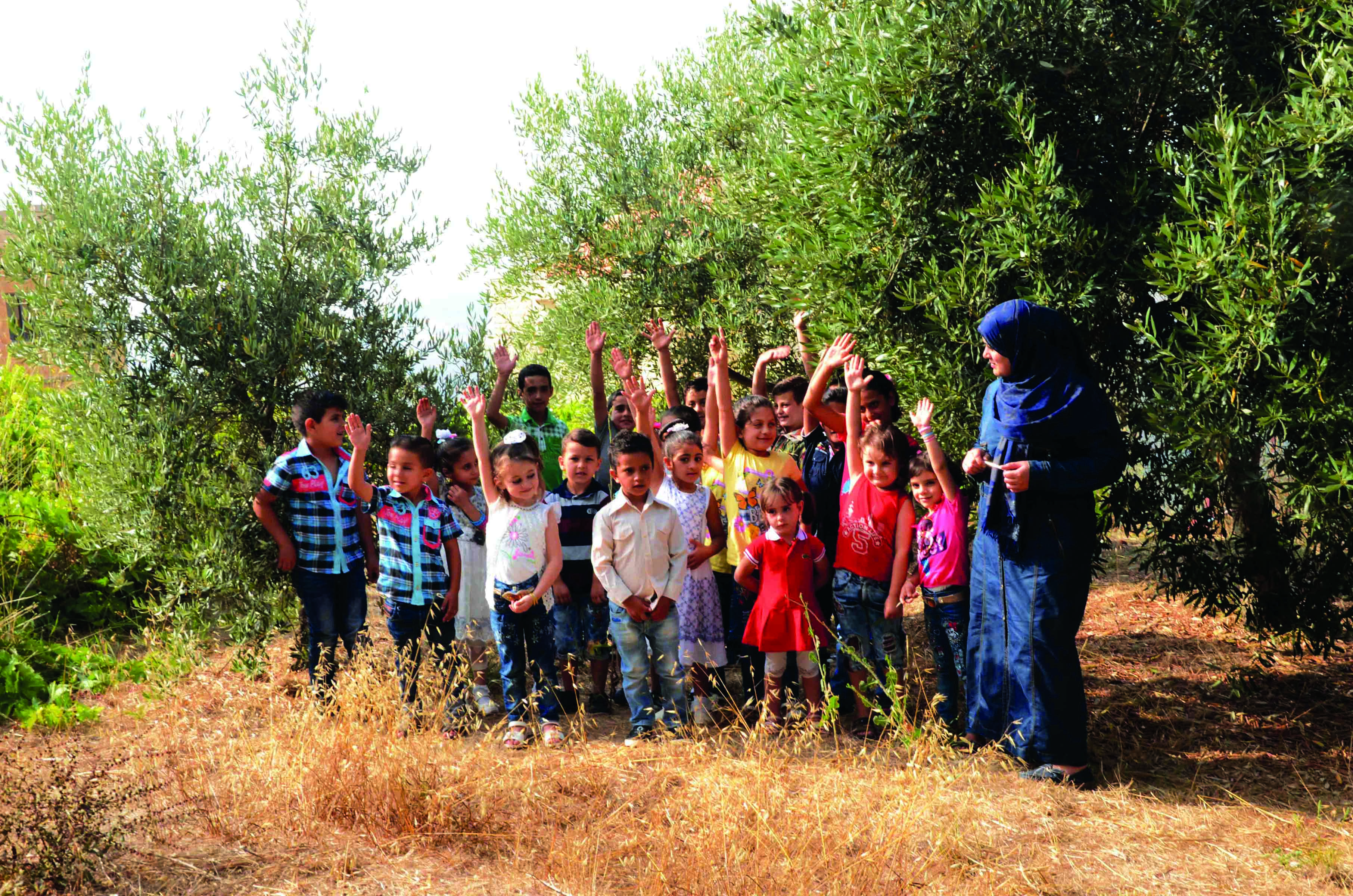 There was also a change occurring in the community.

“There has been a transformation in way the native Bhamdounis view the Syrians, especially the children. At first, they were curious about where those tiny kids were going and what are they doing all dressed up and carrying backpacks,” Khalil said. “Once they found out about the school, they put their fears and apprehensions aside and many approached me with offers to help.”

Asim remains employed by Khalil, living in an apartment below his house. His older two kids are in second and fourth grades in a private school. His youngest child is the latest addition to the Al Fadil preschool.

For the past two years, the school has held a Christmas party for the kids, complete with a visit from Santa and gifts. In return, the kids sang carols to Santa. “It is a wonderful sight to see these children singing together,” said Khalil. “But most wonderful is to see both communities being brought together by this tiny preschool.”

HOW YOU CAN HELP!

I left Lebanon in 1976 to pursue my college education abroad as the security situation deteriorated.

But my desire to return home someday never wavered. On the contrary, it only grew with time. While I was away, I constantly felt that there was a void in my life.

So when my daughter and her husband decided to open a wine bar in downtown Beirut, I knew
that the time had come for me to return home. I was most attracted to return to the village life where everyone knew everyone else, where the pace of life was a little slower and where human interaction was more valuable than financial reward.

When I go on my early morning walks with my two dogs, I am greeted by almost everyone I meet and frequently invited for coffee or meals. The older women in the village even know what my favorite dishes are.

I enjoy the quiet and relaxing atmosphere, but I love interacting with the village people. There is a charm to the old folks in the village. These people are simple and pure, warm and kindhearted, gracious and hospitable. They are living monuments to our past and our traditions. They are our roots. They provide me with a great sense of belonging.

Salt & Light is a continuing series featuring faculty, staff, students and alumni who live out Christ’s charge to make a difference in the world. See bizmagazine.nd.edu for additional profiles. “You are the salt of the earth...You are the light of the world...” Matthew 5:13-16