Dispatch from the Foot of the Cross

Carolyn Woo, former Mendoza dean, reflects on her five-year term at CRS and what we can learn from it.

Carolyn Woo was the Martin J. Gillen Dean of the Mendoza College of Business from 1997 to 2011. After departing Notre Dame, Woo accepted a five-year term as president and CEO of Catholic Relief Services (CRS), the official international relief and development agency of the U.S. Catholic Church. With a presence in more than 100 countries, CRS serves 100 million-plus people around the globe.

Woo’s term with CRS ended in 2016. During her tenure, the agency achieved significant success, perhaps most notably in winning large, multi-year grants to increase its transformative and sustainable work. In the past two years alone, CRS has been awarded multiple grants of more than $50 million each.

In this essay, Woo writes about her faith in stepping into the CRS leadership role, her vision for the organization and how her “front seat to world events” has changed her. 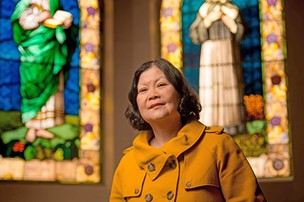 I came to know Catholic Relief Services (CRS) by serving as a board member from 2004 to 2010. I was very inspired by the organization — I felt it had unmatched operational excellence and extensive reach and commitment. When I was asked to take the helm, I had to grapple with the issue of giving up my tenure at Notre Dame.

People never give up tenure. I’ve certainly never met a Chinese immigrant who gave up tenure. Yet it was one of the most freeing experiences for me. It was difficult to say, “I don’t need that security. I go with God. I’ll be fine.” But it was part of my transformative growth. And of course, the people we serve don’t even have security into tomorrow.

I felt deeply about accepting this responsibility. It was an opportunity and a privilege to serve people who are the poorest and the most vulnerable in the world. Historically, Catholic Relief Services has been very successful in responding to emergencies. But I could see that if the organization just kept working hard doing the same thing as in the past, we might not be able to participate in a big way in the kind of systemic intervention that now is necessary to succeed in development.

We had been working with our heads down. But that’s how organizations lose their alignment with the external environment. We needed to lift our heads up to meet the new demands, to shift the emphasis from the aid itself to addressing a problem’s root causes, and to help each community determine how it can sustain advances after the funding ends.

Catholic Social Teaching (CST) is the touchstone for all the work that we do. At Catholic Relief Services, we use an approach called Integral Human Development. That means working with individuals, families and communities on the deeper issues in a holistic way, such as long-term economic security, family strengthening, health and nutritional services, community building and conflict resolution, the understanding of rights and the development of advocacy skills.

When I took on the leadership role of president and CEO, I focused on three main goals: organizational effectiveness, leadership development and keeping sight of our mission.

Bringing about organizational change is its own kind of challenge. My field of expertise is strategy. The first thing we needed to do at CRS was to develop a master plan because we were shifting out of alignment with the new developments in the environment. We selected three sectors where we felt we had the most to offer — emergency, agriculture and health. For each of these sectors and all other major projects, we identified five core competencies that would drive our operational excellence.

For example, as part of the Information Communication Technology for Development (ICT4D) initiative, we invested in the implementation of mobile technology in the field. The use of such technology is highly transformative as it affects how we register and engage beneficiaries and seek their input and feedback; the manner and scope of services we provide through cell phones; the ability to seek input and monitor progress in real-time, and the ability to keep detailed records. Mobile technology also allowed us to do monitoring and evaluation — to measure not what we have done but what good we have done. It’s an evaluation of impact.

We also wanted to make sure that peace building and empowerment of women and girls, as well as men and boys, cut across all of our programs. Most of the time, women get the short end of the stick. They don’t have what they need. We wanted to make sure that they’re empowered. But we also had to be sensitive that sometimes men also are left behind, particularly if they had no land rights. And peace-building is so important. We worked in a lot of conflict areas. Social justice across the sectors was paramount to us.

From the start, my plan was only to be at CRS for five years. I didn’t want to be away from my home and my husband, David, back in South Bend longer than that. So I wanted these five years to matter. And a necessary way to do so was to look beyond these five years to the core strength of any organization, which is the next generation of leaders. I’ve always been a teacher. I saw my role at CRS much more as a teacher than as a boss.

I built an executive leadership team of 16 colleagues. Seven of these were women. The team was quite young, in general, mostly in their 40s and 50s. They had always been dedicated, talented and operationally excellent.  But now they know how to strategically move the organization ahead. A lot of people in the humanitarian and development sector say that CRS is the go-to place to find talent. In some ways, the mark of a very successful organization is that your people are wanted by other agencies. The key is you have to be continually developing them.

Finally, we needed to make sure we kept our mission at the fore. Mission was what kept us energized and grounded; it was our touchstone. The mission, of course, was the gospel, where God called us to attend to the poorest and the most vulnerable. Therefore, we serve on the basis of need, not on the basis of creed. Though our colleagues come from different faith backgrounds, we all hold Catholic Social Teaching as our operating guidelines. We say CST is Catholic-inspired, but universally applicable.

God is our partner

The people who serve with CRS are very committed to God’s teaching.  However, I think that it is important also to spend time to know God. Not just to know God’s teaching, but to have a sense of God’s presence. A person of faith has to think about God as the source and the ever-present partner. Otherwise, we underestimate what we can do. We are aware of what we cannot do. But the types of problems we face require us to think not so much about what we can do, but what we should do. And what we should do generally exceeds what we can do. Therefore, we have to remember this is not just our work. This is God’s work. He multiplies our work and makes the impossible possible.

I have seen God in the world in such different ways during my time at CRS. First of all, the concept of evil used to be abstract to me. It’s no longer abstract. I saw it. I saw the destruction, the mutilation, the humiliation that people can inflict on others because they are not able to see — beyond the grievance, competition, or rivalry — a fellow human being whose life is sacred. Yet in these circumstances, my faith in God actually grew, because I couldn’t believe God would send us to tackle evil on our own. In these times, I hold onto God’s promise that He never abandons us. He is in the suffering of His people. I think that Jesus took on evil as a human being to show us that this is our fight, too.

For me, now, there is no question that God sends each of us to be where we are supposed to be. We could be attending to children, or an elderly parent, or just our family. But where we are is not accidental, because God sends us each other. There have been many times when I’m in a situation, and I say, God, where are you? And the answer always comes back, Well, you are there. So go do your work.

Oftentimes, where God sends us is to the foot of the cross. There are people who suffer terribly. In Gaza, I met a 14-year-old boy in an area where there had been substantial aerial bombing. His parents had lost everything. We had provided them with a new home and enabled the father to access cancer treatment. But the father could not get over his sadness about his children and asked his son to pull up his loose T-shirt to show me something. The teenager’s stomach was the size of a soccer ball. It was filled with shrapnel. You know how much pain you have when you just have a stomachache? And this boy would not have access to the medical care he needed. His story has stayed with me. I could see my own sons in that boy.

There were Syrian refugees who were raped. I met one woman in a shelter who had not only been raped, but her son, who was about 6 years old, saw it — and hated her for it. Her husband was so angry, he threw acid at her. Her family disowned her. And it happens over and over and over again to many refugees and displaced people.

These incidents make Jesus’ crucifixion very real to me. Where did the apostles go from the foot of the cross?

They went out into the world and told the good news, not just the crucifixion. They started with the resurrection, with the message of forgiveness, the power of goodness over evil, and redemption by God who loves without conditions. That’s our faith, right? I said I had a chance to get to know God in all these different ways. They’re not all light. There’s a lot of darkness. But, of course, the light shines even brighter in the darkness.

What is my charge to the faculty, staff, students and alumni of Mendoza? Business schools are in the business of generating prosperity. But it is really important that that prosperity is for everyone. It must be achieved in the right way and used for the benefit of all. It cannot come from an attitude of ‘I’m smarter than you, I’m closer to the trough than you so I can get there first. I can take what I want and leave you the scraps.’

I actually think that poverty and hunger are solvable problems, but I think that the violence, the degradation of the environment, the inequality which has been created even as countries become richer — those are the things that give me big worries. These can all stop with a more loving heart, a more committed faith.

We cannot make progress at the cost of other people. I’ve seen the aftermath.