THE BUS IS BACK

Jerome Bettis announced his return to Notre Dame to finish his business degree 30 years after leaving for a Hall of Fame pro football career in a thoroughly modern way.

His teenage daughter posted it online without his knowledge.

Bettis had sent his two kids a video of himself on campus on the first day of second semester to show them he was there and how cold it was. He didn’t know that Jada, 16, put the video on Twitter until a friend congratulated him. He was so stunned he swiveled around looking for a paparazzi camera, wondering how he was found out. 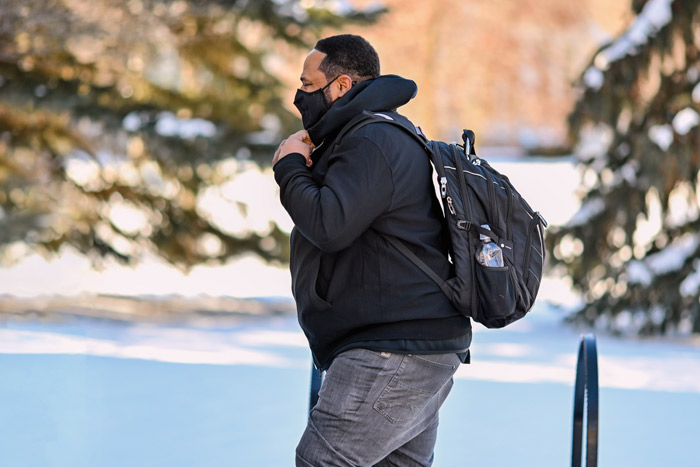 The surprise was fitting because Bettis, nicknamed “The Bus” for his punishing running style, said figuring out the new technology today has been the biggest difference from when he left school to pursue the NFL in 1992 after the first semester of his junior year. There were barely any computers then, much less personal laptops.

“It is so strange, because I am so behind the times,” Bettis said in a late January interview with NBC’s Anne Thompson (ND ’79). “I’m a dinosaur in the sense of school. I don’t know where anything is. I don’t know what the normal protocols are. I’m struggling with technology.”

Bettis gave some specific examples that are familiar nightmares for technophobes. His kids had to show him how to format and submit papers he wrote for online classes. Worse, for his first assignment this semester, he didn’t include the attachment with his paper in his email to the professor. But the most awkward episode left him sitting in a classroom alone.

“I’m looking around and I look at the time and there’s nobody in the room,” Bettis said. “So I go back, I look at my schedule. I go out, I look at the door and I’m like, ‘Where is everybody?’ Finally, I looked at my email and the class was canceled. I didn’t know to look at my email before class, but everyone else did.”

Bettis said going back to the Mendoza College of Business at age 49 has been well worth these challenges. The same children who outed his adventure to the world provided his original motivation.

“I think it’s so important, one, that I complete the task at hand,” he said. “I promised my mother that I would finish and get my degree. But most importantly, I have two children. We’re already in that college mindset. For them to see dad finishing a commitment that he set out 30 years ago — for me to complete that — I think says a lot to them in terms of what they can do with their lives.”

When the intended 1994 graduate completes the task at the 2022 Commencement, Bettis said his mother and family will want to be in the front row cheering him on.

“Because all the experiences that we’ve had were football related,” he said. “This is education related, and you can never take away the education. That’s the message that I’m sending my children, but also the message that I want everybody to know.”

Bettis was the youngest of the three children born to Gladys and Johnnie Bettis in Detroit. He famously didn’t play football until high school, after being diagnosed with asthma and focusing on bowling in his youth. But he shined at Mackenzie High School as a running back and linebacker, and the Detroit Free Press rated him as the state’s top player his senior year, 1989. 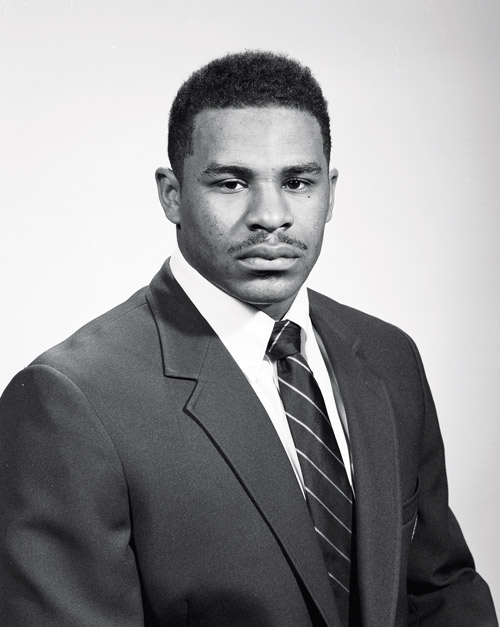 “For me, academics, that was the pathway for a higher education,” Bettis said. “But then I played football and that became my pathway. My parents were very matter of fact about where I went to college. I fell in love with Notre Dame and the rest is history.”

He played for the Fighting Irish during Lou Holtz’s glory days, plowing through defensive lines and winning the lifelong devotion of fans from that era. Shouts of “Give it to Bettis!” roared from the stadium stands, and Holtz was happy to comply. Bettis’ 20 touchdowns (16 rushing, 4 receiving) as a sophomore is a single-season record that still stands today.

After his junior year, Bettis left school early to prepare for the NFL draft, where the Los Angeles Rams selected him in 1993 with the 10th pick of the first round. That year, he was the only rookie selected to the NFC’s Pro Bowl team.

During uncertainty over a trade after three years, Bettis returned to Notre Dame and finished his junior year classes. In his decade in Pittsburgh, Bettis rushed for 1,000 yards in his first six seasons and went to another four Pro Bowls. He retired as the NFL’s fifth all-time leading rusher in 2006 after the Steelers won the Super Bowl and was inducted into the Hall of Fame in 2015.

Bettis said finishing with a Super Bowl ring in his hometown Detroit was a Hollywood ending.

As a legend with a sterling reputation in Pittsburgh, Bettis was able to move right into broadcasting and business. His father died shortly after he retired, and his mother starred alongside him in Campbell’s Chunky Soup commercials in the early 2000s. Bettis started several businesses with his brother John, becoming involved in trucking, staffing, development and marketing, along with his television work.

The idea of finishing his degree developed slowly. He joked about it with administrators during several visits to campus, but the COVID-19 pandemic presented an opportunity. He could take advantage of the time at home in Atlanta to try online classes. He took three last spring and two more over the summer, but football season TV responsibilities kept him too busy in the fall.

“I got through the process, and that’s when I said maybe, just maybe, I can go back on campus and complete the degree,” he said.

Bettis said that despite his technical challenges, he is a much better student now than 30 years ago because he can put the concepts in context and wants to learn everything he can.

“When I was here initially, I just wanted to get through so I can get to the next course,” he said. “Now I retain much more information because it’s things that I want to know about. It’s very enlightening, and I’m excited and interested.”

A background of 18 years in business opens a chasm between Bettis and his fellow students, so he said he has to hold back from talking too much.

His four classes are in strategic management, sports psychology, entrepreneurship and religion in the workplace. Rev. Oliver Williams, C.S.C., who teaches the “Religion, Spirituality and Work” class that intrigued Bettis as an elective, confirmed that he participates regularly and relates the readings to his own work experiences. He said many of the students didn’t seem to know the guy in class more than twice their age was a football star.

Jeff Yatsuhashi, a senior Patriots fan from Massachusetts, did know Bettis, even if a hat and mask made him harder to recognize on the first day. “I had suspicions when he walked in,” Yatsuhashi said.

“I don’t remember watching him play live, but my mom is a huge football fan,” Yatsuhashi said. “My friends ask about getting a picture or an autograph, but he comes in low key and works like everyone else, so it seems best to just let him be.”

Bettis, who lived in Alumni Hall and spent significant time there in his first go-round, said he lives off campus and tries to limit his interaction with the student body. He doesn’t eat in the dining hall and won’t subject his aging knees to Bookstore Basketball. 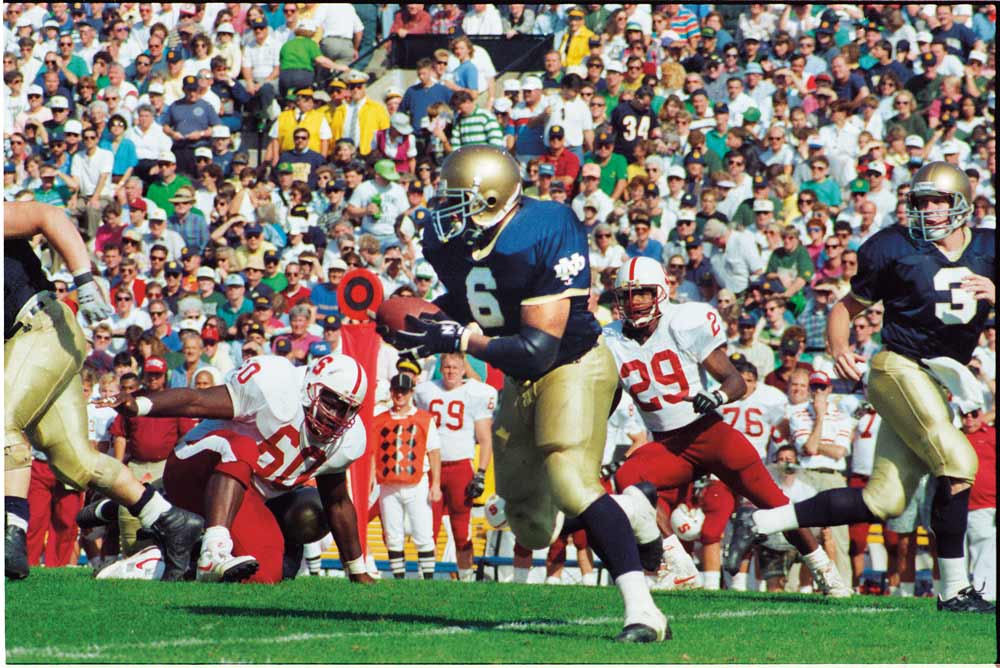 “I’m just trying to be a normal student, which is almost impossible,” he said. “I think it’s easiest that I slip in, get to class and take care of business, and gracefully ease out.”

It’s not always easy. He recalled one class where the professor asked everyone to introduce themselves on the first day. He was sweating by the time his turn came and his “fun fact” was that he returned 30 years after leaving.

“And it was silent,” Bettis said. “You could hear a pin drop. Thankfully, the professor says, ‘Welcome back, Jerome.’ But that was probably the most frightening moment that I had in a long time because I just didn’t know what to expect.”

A few weeks after vowing to remain incognito, Bettis stood in the student section at a men’s basketball game. It didn’t take long for the camera operators and a hot mic to find him, so he gamely hyped up the crowd.

For the Today Show story, veteran interviewer Anne Thompson pointed out the overflow of support for Bettis’ initial Twitter announcement, noting how rare an all-positive consensus is on social media. She also informed Bettis that when he completes his degree in May, that will mean all 21 members of the original class he was recruited with will have received their degrees.

“When you get those well wishes and that encouragement, it makes you feel better about completing the task at hand, because it’s not going to be easy,” Bettis said. “There’s been a few nights where I looked at the syllabus and saw what was ahead of me and said to myself, ‘What was I thinking?’”

Bettis was stumped at first about which meant more — his Super Bowl ring or his Notre Dame degree. Both took hard work, but one was so immediate.

“As of right now, obviously the Notre Dame degree,” he said. “Looking at my life as a whole, I think this would be one of those critical milestones, just like winning the Super Bowl itself. Accomplishing my degree at 49, ultimately 50, I think that’s probably going to be more significant because of what I’ve had to do to get here.”

The Bus said he wouldn’t miss joining the 2022 class for Commencement.

“Absolutely, I plan to,” he said. “I think that’s the culmination, to be able to walk with my ‘classmates’ — if you will, in a strange way. But I definitely would love to walk because I think it will signify a lot, but also so my family can be there.”

Armed with the latest knowledge about technology and business, the new-old graduate thinks “the sky is the limit” for his future.

“There may be some opportunities out there to look at — a new business model,” he said. “Because now, my mind and my eyes have been opened to a new way of thinking, a new way of learning.”

Jerome Bettis left Notre Dame for the NFL Draft in 1993. He helped the Pittsburgh Steelers win a Super Bowl title in 2006 before retiring. Bettis was inducted to the Pro Football Hall of Fame in 2015.