MORE THAN A POLLYANNA

DOUBLE-DOMER CHRISTINA GLORIOSO CLIMBED TO A SENIOR VP LEVEL AT NBC THROUGH HARD WORK AND GRIT. THEN SHE ADDED ‘MOTHER OF FOUR SMALL BOYS’ TO HER RESUME

It was an entry-level position: a runner for NBC Sports during football broadcasts. “To be clear, you’re going to be fetching water,” the interviewer warned Christina Glorioso, then an MBA candidate at the University of Notre Dame.

Her response? “I will be the best water fetcher you’ve ever had.”

She remembers during one game handing an ice-cold water to color commentator Pat Haden the moment he requested it. “He asked, ‘How did you just do that?’ and I said, ‘Every third quarter, you ask for an ice-cold water. So at halftime, I went down and got a cooler.’”

And now, two decades after being arguably the best water fetcher NBC ever had, Glorioso has channeled that same intensity and strategic foresight into her work as senior vice president of integrated marketing for NBCUniversal.

In addition to overseeing integrated marketing activities for the News Group (including “Today,” “Nightly News,” “Meet the Press” and all of MSNBC and CNBC), Glorioso is responsible for two cable channels (USA and SYFY) and developed an in-house branded content studio from scratch. The branded content studio has been so successful in the news department, other NBCUniversal units are looking to replicate her model.

When it comes to daily schedules, there’s busy, very busy, frenetic ... and then there’s Christina Glorioso.

Every minute of her workday is accounted for. She watches NBC morning news shows while getting ready for work. She carries around a typed list of people she needs to check in with, along with bullet points to discuss. She picks up her large iced tea — already ordered on the Dunkin’ Donuts app — as she passes through the underground concourse connecting the various buildings of Rockefeller Center. 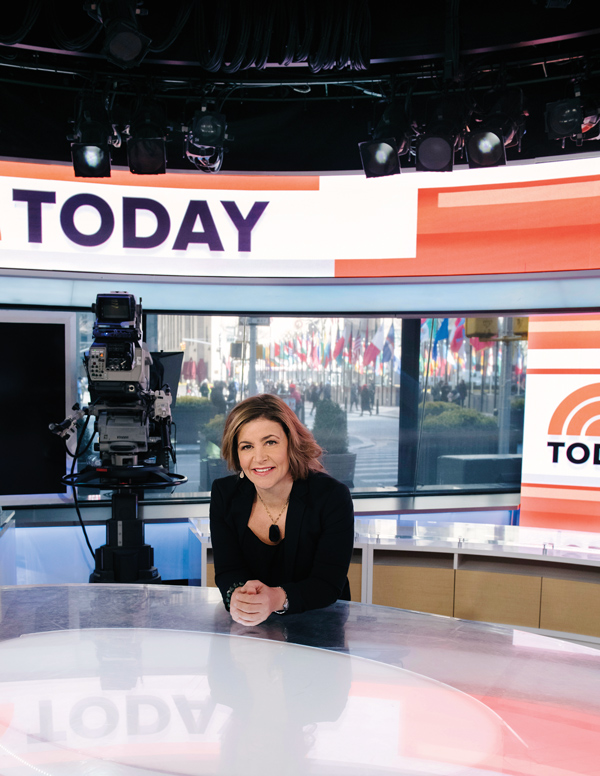 Glorioso began one morning last January in a glass-walled conference room, strategizing with other marketing team leaders for the TV upfronts, a six-week period each spring when networks negotiate billions of dollars in advertising contracts. It was the first of her day’s many meetings, including a concept pitch for a major branded marketing campaign and a one-on-one over lunch with one of the six VPs who are her direct reports.

Despite her packed schedule, Glorioso stopped to chat cheerfully with colleagues in the elevator and halls, even waving at anchors on commercial breaks as she passed. And that afternoon, she spent an hour mentoring an enthusiastic young NBC page.

Everything was finished by 5:27 p.m., early by New York City standards, so she could catch the 5:46 p.m. train home to her four boys, 6-year-old Chase, 3-year-old identical twins Jake and Jesse, and Camden, 8 months.

Glorioso could be described as scrappy or determined, but those adjectives melt into clichés when you meet her. She’s smart and curious and terrifically passionate about her family, faith and work. And maybe an eensy bit contrarian, but in a good way. She’s fine with fetching water, if that’s what it takes.

Her high school counselors often advised classmates that they were “not really cut out for college.” Instead of taking that advice, she went to Notre Dame.

“I believe that you can have whatever you want,” said Glorioso (MBA ’99, BBA ’95). “I don’t mean to be Pollyanna about that, but I grew up with our household income below the poverty level. My parents were divorced, my mom worked in the school cafeteria and my father was a sanitation man. Hard work is nothing new.”

Glorioso’s love for Notre Dame runs deep. She began her path into business as a Notre Dame undergraduate, where she studied finance, played club lacrosse and worked as a student athletic manager for men’s lacrosse, earning a 65 percent scholarship. After graduating, she worked in technology sales for three years, where she realized it’s not worth it to make a lot of money if the job makes you miserable.

After returning to Notre Dame for an MBA, Glorioso was determined to work in sports and cold-called until she landed a job at SFX Sports, which was the predecessor to Clear Channel Entertainment (now Live Nation). She was earning one-third of her pre-MBA salary, and as the only woman in a non-assistant role, she says, “They threw me all the crap.”

But while her colleagues took accounts with professional men’s teams, Glorioso built successful campaigns for clients the men didn’t want, including the Little League World Series and the U.S. women’s national soccer team, whose growing popularity she helped boost by implementing post-Olympic and World Cup tours.

Over time, Glorioso realized that what she loved about her job wasn’t its proximity to sports, but the marketing itself. “That was eye-opening for me because it wasn’t about the industry, it was about the function,” she said. “I was like, ‘Oh, I’m a marketer!’”

With that knowledge, she left sports for entertainment, taking a VP position at Viacom. She initially worked on Infinity Radio before transitioning to Viacom Plus and then MTV Games, where she eventually oversaw marketing for the billion-dollar “Rock Band” franchise including a new concept in the video game world: weekly digital downloads of new content. She later worked as chief marketing officer at Majesco, a video game company creating products like “Zumba Fitness,” “Cooking Mama” and “Pet Zombies.”

“I jumped into roles that I was not qualified for,” she said. But she was confident she could work hard and learn the ropes of a new product. “I found my through line — that I was great with brands.”

By 2011, Glorioso began contemplating another kind of jump.

She had reached her late 30s, and she was happy with her life and career. But she increasingly worried she would miss out on being a mom. “I got to a point where I was like, if I wait for a husband, I might not be able to have kids,” she said. “But I realized, if I have kids now, I can always get married later.” After significant soul searching, she decided to become a single mother by choice.

Glorioso knew the decision would shock some people in her life. There was her old-school Italian father, and her mother’s extensive Irish-Catholic family. One mentor advised against the decision in a letter that “told me all the reasons not to bring a fatherless child into the world.”

She respected his opinion, but said, “I decided I wanted a family. I made the decision. In my gut, I kind of just knew, I’m not going to give up. If there’s something that I want, I know that if I work hard, I can figure out a way to make it happen.”

She reached out to Notre Dame as she knew her decision to have a non-traditional family may require her to give up her position on Mendoza’s Business Advisory Council. “If Notre Dame had not wanted to have me in a role representing them, I would understand,” she said. “I wouldn’t agree, but I would understand.” But she was welcomed and encouraged to stay involved. 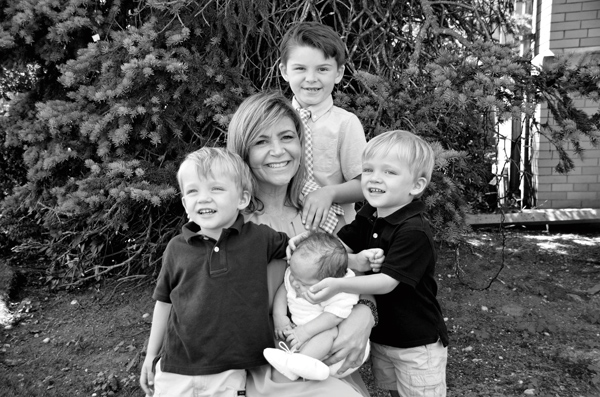 So in 2012, Glorioso welcomed her son Chase. Three years later, she decided to have a second child and was surprised to learn she was pregnant with identical twins. “I bite off more than I can chew in everything I do,” she said. “So I completed my family with a fourth.”

Somewhere in there, another miracle happened. The self-sufficient, can-do, can’t fail, water-fetcher realized something about herself — she needed to learn how to accept help.

That was a tough one. The change wasn’t easy. “When I had my first son, my mom really tried to help me, but I wanted it all done my way,” she said. But three children later, when her mom, sister, two au pairs or house cleaner load the dishwasher or dress her sons differently than she likes, Glorioso has learned to appreciate that the task is done. “We’re focused on the important things. So I’m like, you know what? Sometimes they’re dirtier than I want them to be. Sometimes they don’t match. But they’re really nice boys. And they love each other.”

Motherhood also helps her keep things in perspective. Sometimes she has to reschedule non-crucial meeting requests after her 5:27 end-of-day. “The point is, I want to go home. I want to see them. I want to be there,” she said. “And I’m lucky that, because I’m an SVP with 20 years of experience, I can make that decision. And I found that when I first came here, it was hard to leave, you know, because everyone’s watching you leave. But now I use it as motivation to tell everyone they have to leave. Whether they have kids or not. Your work is not your life.”

In fact, using her example and position of power to help others build — and enjoy time with — their families is one of the proudest accomplishments of her life. Recently, one of her employees, a new mom who would happily stay at her desk until 10 p.m., asked for a last-minute day off on a quiet Friday. “And I was like, hallelujah!” said Glorioso. “Yes! That’s what I want you to do. I want you to put your life first. That’s why you have vacation days!”

In February, Glorioso was honored as a She Runs It 2019 Working Mother of the Year, a recognition given to celebrate working mothers in the advertising industry who have succeeded in both balancing work and family, serve as positive role models and mentors, and distinguish themselves in their communities.

“What I’ve learned is to lead instead of manage,” she said. “I can’t have my hands in everything. So I’ve learned to teach people how to get the work done in the way that I think will be the most effective, and then I let them do it.” And she has learned to accept that, even if something goes wrong, “This is not rocket science. No one’s dying here.”

Recently, her oldest son completed a family tree project for school. Unlike many of his friends, the father side of his tree was blank.

“For the past six years, I have had to prepare him for that moment,” said Glorioso. “And luckily, because of our faith, he’s learning in Catholic school and at home that God made all families different.”