How does a finance major end up as Miss Rodeo America 2016? Katherine Merck found a way

Nine years ago, a high school girl sat down to write her Notre Dame admission essay.

“Share a unique interest and explain what you’ve learned from it,” the prompt read.

She hesitated. Yes, she had an interest — a driving passion, in fact — that shaped her life. And, yes, it was certainly unique — far enough from the mainstream that she wondered if it would keep her out of the school of her dreams.

But, staying true to herself, Katherine Merck composed “A Cowboy is Born, Not Made,” expressing her love of horses, riding and the Western lifestyle.

The essay began with a description of Merck’s happy childhood in Spokane, Washington, filled with ballet classes, gymnastics, music lessons and drama training. And then, when Merck was 11, she signed up for a weeklong YMCA horse camp only because regular camp was full.

“Up at 5:45 a.m., hiking to the barn to feed horses before breakfast, trotting around in a dusty corral at lunchtime and late for dinner after currying,” she wrote. “I turned up at meals dirtier than ever. But I reveled in these new experiences.”

In fact, horses became her life.

She begged her parents for riding lessons and, once she got them, started mucking stalls at the stable in exchange for extra riding time. She became skilled so quickly that the stable owner soon had her leading trail rides.

Of course, Merck wanted her own horse and wore her parents down until they agreed to match whatever she could earn. “I saved every penny — teaching ski lessons, filling warehouse orders, babysitting,” she wrote. She bought her first horse at age 13.

She dropped ballet and music lessons and found a retired bronco rider to teach her reining: the art of guiding a horse through precise patterns of circles, spins and stops, including the signature skidding stop. She entered reining competitions and had won five belt buckles — a rider’s version of a trophy — by the time she applied to Notre Dame.

Her admission essay concluded by explaining the cowboy’s three-legged stool of success: hard work, working smart and getting along with others. And, “the seat holding the legs together represents being true to oneself, having the courage to go back into the arena after a bad ride, learning from one’s mistakes and doing one’s best,” she wrote.

That cowboy essay helped Merck get accepted into Notre Dame, where she graduated in 2012 with degrees in finance and medieval studies. And that essay was just the first time her cowboy world and Notre Dame world would complement each other for a life-changing experience. 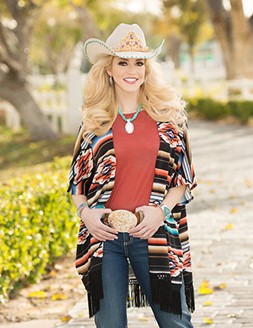 It was jaw surgery that got Merck thinking about becoming a rodeo queen. She had just graduated from Notre Dame, and instead of starting a career like her classmates, Merck underwent double maxillofacial surgery to correct a misalignment. Both jaws were broken, six plates and 35 screws were inserted into her face, and her mouth was wired shut.

She couldn’t eat solids, leave the house or be around horses for months. “During that time, I kept thinking about ways I could stay involved with horses and the Western way of life other than riding competitions. I had learned about Ignatian spirituality at Notre Dame, so I spent a lot of time asking, “What gifts did God give me? What talents do I have? How can I use them to make the world better? And I kept coming back to my love of people and representing people.

“That led me to law school. I want to assist farmers and ranchers in planning for their future because I have a passion for finance and agriculture and people.”

Perhaps unexpectedly, these passions also made her think about becoming a rodeo queen, an ambassador for the lifestyle she cherishes.

When Merck started law school at Gonzaga University in 2013, she also moved forward with her rodeo queen plan. She used the research and networking skills she learned at Notre Dame to understand everything she could about pageants as she prepared to enter her first competition, Miss Spokane Interstate Rodeo, in January 2014.

“It was a whole new world for me,” she says. “I reached out to some local queens for advice. I searched the internet — Notre Dame is all about research, so I was ready for that. I bought a study guide from one of the past queens. I bought a media guide from the PRCA (Professional Rodeo Cowboys Association) that has information on rodeo records, on what the PRCA is all about, on rodeos in general. And I’d been around rodeo, so I had the rodeo knowledge and the horsemanship.”

A true Domer and law school student, she also had impressive presentation and public speaking skills with a special talent for thinking on her feet.

Merck won Miss Spokane Interstate Rodeo. Ten months later, she won the title of Miss Rodeo Washington 2015, after seriously debating whether she should even enter because of the demands of law school.

She had the same hesitancy about entering the Miss Rodeo America pageant in December 2015, especially since she would have to take a year off law school if she won.

But she went for it. After a weeklong competition in Las Vegas that tested horsemanship, presentation skills and rodeo knowledge, Merck took the top crown for American rodeo queens when she was named Miss Rodeo America 2016.

It’s a role she cherishes. “I love the family community and the shared values of rodeo,” she says. “The rodeo world is just like Notre Dame: It can be competitive, but in the end everyone is trying to support each other. It’s great to be back in that kind of community.”

It’s February 19, 2016, the opening night at the Silver Spurs Rodeo in Kissimmee, Florida, the largest rodeo east of the Mississippi. The crowd is primed for bull riding, bronco bucking, calf roping, steer wrestling and barrel riding from the dirt floor of the indoor arena.

But if frenetic action is one face of the rodeo, tradition is the other. And that means opening the festivities with rodeo queens.

The announcer introduces Miss Rodeo Arizona, Miss Rodeo Arkansas, Miss Rodeo California. On and on through 21 states. There’s a Miss Silver Spurs, a Miss Rodeo Canada and a slew of local and regional queens, some just elementary school girls.

After each name, a smiling cowgirl on a spectacular horse bolts out of the gate, holding reins in one hand and waving with the other as she circles the arena.

Fans cheer as the golden-haired cowgirl on a golden horse darts from the gate, waving and smiling in a dazzling lap.

Though she appears in the show arena for only 16 lightning-fast seconds, Merck’s night is just beginning. In the arena concourse, she and the other queens are mobbed by a surprising array of rodeo fans.

A few police officers seek her out to chat after meeting her earlier in the week, and it’s as if they’re old friends.

Three adolescent boys shove each other forward until one of them stands in front of her and says nothing. “Do you want an autograph?” Merck asks, pulling out a pad of photos and a Sharpie and signing a picture, taking care to spell the boy’s name correctly.

Little girls tug on their parents’ hands to lead them closer to the pretty queen. Camera phones come out.

Through it all, Merck is not only smiling and friendly, but completely focused on the fan in front of her, never rushing anyone and making each person feel like a friend for whom she has all the time in the world.

“I always remember that whenever someone meets me, it’s probably their first time meeting Miss Rodeo America. And I think about how I want that experience to be for them,” she explains. “The effect you can have on people with kindness is amazing.”

Beyond signing autographs and traveling 340 days this year, Merck’s queen adventure is building unexpected bridges to law, to business, to the future.

The week before the Miss Rodeo Washington pageant, Merck — one of the top law students at Gonzaga — was chosen to escort the chief justice of the Washington State Supreme Court when the justices visited campus. She told them about the pageant and ended up delivering her speech for them it as if it were an oral argument for the state of Washington.

“They learned what a rodeo queen is, and one of them said, ‘It’s just like running to be a judge,’” she says, laughing. “I want to be a judge someday and even a Supreme Court justice, so this was an amazing connection to make. I visited the Supreme Court later and they remembered me. And my friend pointed out that it’s easier to remember someone who’s a rodeo queen than the average law student.”

When she becomes an attorney, she plans to work in agricultural estate planning, land use and water rights, so she’s making valuable connections as Miss Rodeo America. “The Washington State Cattlewomen’s Association invited me to their conference, for example,” she says. “And interacting with the people in agriculture, farming and ranching is so important for me. This is the opportunity of a lifetime, both personally and careerwise.”

Of course, no story about a queen is complete without mentioning a crown. Like every Miss Rodeo America crown since 1965, Merck’s is made of Black Hills gold, pearl and alexandrite that’s strapped around her custom-made cowboy hat. And then there’s the huge, glorious belt buckle that says Miss Rodeo America in gold and Katherine Merck in blue. (And, yes, it’s just coincidence that these colors match the Fighting Irish colors.)

“Anyone in rodeo wears the buckle of their highest honor because these are our trophies,” she explains. “So I will probably wear this buckle for the rest of my life.”

Even on the Supreme Court?