THE ONLY MANDATE: YOU MUST DRINK THE WATER.

The five Notre Dame MBA students faced a task that wasn’t for the fainthearted: Drink a glass of water that 30 seconds before was a disgusting mixture of ditch water, dirt, rocks and even cigarette butts.

This wasn’t some team-building version of Truth or Dare, but a real-life demonstration of the water filtration system that the students — all military veterans — shortly would be distributing to rural residents of Puerto Rico who were still struggling with the aftermath of Hurricane Maria.

Part of this aftermath was a pervasive attitude of distrust on the part of the residents toward government or relief agency efforts, especially in the rural areas where help was very slow to arrive. If the Notre Dame team wanted the people to use the filters they were handing out, there was only one way to convince them.

“We couldn’t hesitate in front of the people,” said Tyler Shields. “If we filtered the water and then didn’t drink it ourselves, they were never going to trust that it was clean. So every time we would filter it, no matter where that water came from, we had to be the first ones to drink it.”

“We all took a drink after it was filtered and the water was totally fine,” said Luke Wilson. “I was wondering if anybody was going to get sick, but no one did.”

Shields, Wilson and three Notre Dame MBA Class of 2019 classmates — Dan Weathers, Corey Waldrep (pictured above) and Robert (R.J.) Dulin — traveled to Puerto Rico in October to work on a project for Waves for Water (W4W), a nonprofit founded in 2009 with the goal to provide global access to clean water. The organization has responded to almost every major disaster in the last four years, including hurricanes, earthquakes and tsunamis in Nepal, the Philippines, Haiti and the U.S. East Coast.

The students, along with advisor Andrew Wendelborn, participated in the project as part of an added focus to the Notre Dame MBA Interterm courses, which will include IMPACT projects where students use their business skills to serve an NGO, non-profit or social enterprise.

“The W4W project brought together a combination of all the things that I learned through my first year, and Mendoza’s mindset of business for the greater good,” said Shields. “The NGO and a lot of charity organizations are doing great work, but I think we as MBA students bring a unique perspective. The NGO needed our perspective about what they were doing to make it better and more efficient. And I think this really kind of illustrated for me how I can use my education in business to go out there and apply in a number of different ways.” 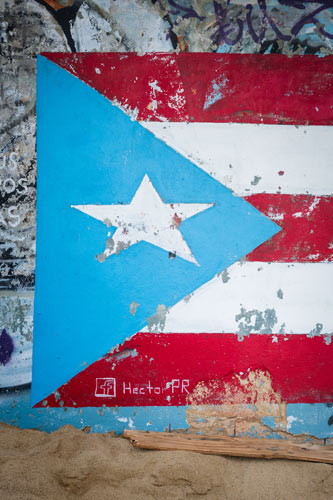 “San Juan looked like it was most of the way back, but you could see a lot of damage on the buildings, and you could see some of the remnants of what happened,” said Shields. “But when we went out to the west of the island, you could see that there was still a tremendous amount of damage.”When Hurricane Maria hit the island nation on Sept. 20, 2017, with a furious wind speed of 175 miles per hour, the Category 5 storm destroyed more than 80 percent of the island’s power lines, leaving 3.4 million Americans in the dark. A year later, much of the electricity and other utilities has been restored in the populous areas. But it’s a different story in the remote, indigent areas.

Destroyed mangroves, vacant houses still marked with the first responders’ graffiti, and most critically, a continuing problem with a steady supply of clean drinking water.

“Most of the places we were at had power. The issue was water,” said Shields. “The residents would have running water maybe some days of the week, but then it would cut off randomly and you wouldn’t know when it would turn back on. And with some of the water sources, you still have to be careful about the potability of the water.”

The objectives of project were for students to gather and utilize important demographic data; gain first-hand experience in working with an NGO partner to provide crisis support; learn a model for creating self-sustaining practices for local populations; and become immersed in best practices for working with indigent populations with dignity, equality and compassion.

They were all veterans per the request of (W4W), primarily due to their experience working in remote communities.

“We’re used to problem-solving at the lowest levels. And I think all of us had experience working in small teams, without any supervision or manual on how to do it. We just figured things out,” said Shields, a former U.S. Army first lieutenant who chose the Notre Dame MBA because it aligned with his military mindset of “doing something bigger than a normal job.”

“A lot of what we did over there in Puerto Rico was so-called guerilla humanitarianism,” he added. “You don’t necessarily know where the need is or what the need is. You just know that there is a need.”

They spent a day in the capital city of San Juan, learning about the island and its current challenges. They also got a tutorial in using the Sawyer water filter that they would be distributing to the rural residents currently living without a reliable water supply. Then the team headed to the villages of Isabela and Aguadilla, where they walked door to door to find people in need of help. 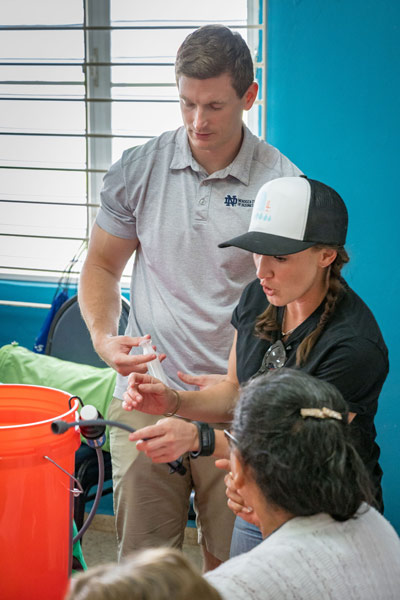 The filtering systems were fairly simple devices constructed of 5-gallon buckets, the filter itself and a few other pieces. The Sawyer filter, which uses a proprietary fiber membrane technology, costs about $50 and can provide enough clean drinking water for about 100 people for five years if properly maintained. They also installed cisterns with filtration systems at several farms.“They weren’t the most easy to find,” said Wilson, who served as a U.S. Army second lieutenant. “They don’t have cable. They don’t have internet. Their basic services are knocked out. You need to just go out and find them. Once they know that you’re in the neighborhood and words starts to spread that you’re there, then they start to come out of the woodwork. Then you can actually get to work and explain to people what it is that you’re there for. You can actually start helping them in a way that they appreciate.”

While the students put in their share of manual labor, their efforts supported a much larger purpose for the NGO and for themselves personally.

“The team in Puerto Rico had an incredible experience working with the Notre Dame team, and because of our great experience, we are looking at expanding this effort to work with other prestigious graduate business schools,” she added.Clean drinking water is just one small, but very important tenet of international development,” said Janiece Marquez, the Latin America regional director for W4W’s Clean Water Corps, a specialized clean water task force that partners with the military to provide disaster relief around the world. “Access to clean drinking water has the ability to reduce the spread of waterborne illness, increase the productivity of beneficiary populations, and augment a nation’s GDP.

“It’s all about problem solving,” said Wilson. “You get put on the ground. You have to think about what resources should go where. It fits with what Father Sorin said, that business can be a force for good in the world. And it fits with the business mindset. It’s all about using business as a way to help people.”

Read about the spring 2019 immersion projects at mendoza.nd.edu/news.